A Royal Welsh veteran from Aberystwyth has been completing a three-year fundraising challenge alongside other veterans and serving soldiers in his regiment, in memory of Captain Stephen Healey who was killed in Afghanistan on 26 May 2012 when his vehicle was struck by an improvised explosive device (IED). 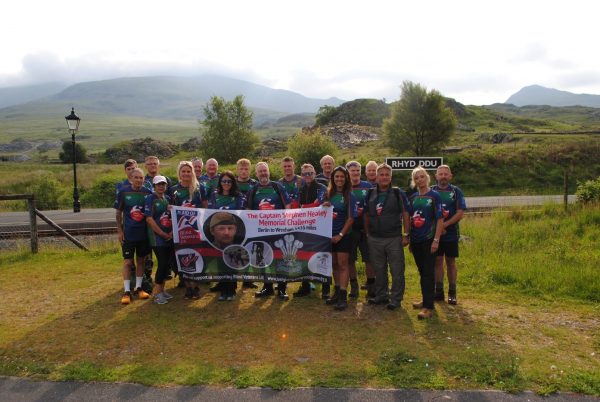 Captain Colin Jones MBE, from Aberystwyth, ascended Snowdon blindfolded on Saturday 19th June, along with 20 other team members as part of the Captain Stephen Healey Memorial Challenge. Colin and his team completed the ascent in an impressive 2 hours and 27 minutes. Colin says:

“As I was blindfolded, I had to put my complete trust in those guiding me. It really made me realise what the blind veterans must go through daily. The experience was certainly humbling. I received lots of support from my fellow teammates with one even deciding to join me in the blind folded challenge”.

Colin has been raising funds for Blind Veterans UK since September 2019. He says:

“I didn’t know Stephen personally, but I have done lots of fundraising challenges over the years. A few of the guys in my regiment knew about my fundraising so they approached me, and I agreed to do a challenge in memory of Stephen”.

As well as the Snowdon challenge, Colin arranged a charity football match in the afternoon between the Royal Welsh Veterans and Aberystwyth Town Football Club.  MP Ben Lake who was part of the Snowdon team, was also present at the football match where he cheered the football teams on and presented Thea Davies, Stephen’s partner with a Royal Welsh Football shirt, displaying rank, name and Call Sign. Colin says:

“Sadly, the Royal Welsh Veterans lost 2-1 but a brilliant day was had by all raising funds for Blind Veterans UK and remembering Captain Stephen Healey”.

Captain Stephen Healey, who was from Cardiff, served in the 1st Battalion of The Royal Welsh regiment. He joined the Army in 2007 and was deployed to Afghanistan on 9 March 2012, taking over command of Checkpoint Langar as part of Combined Force Burma in the 1st Battalion, The Royal Welsh Battlegroup. Unfortunately, on 26 May 2012, whilst on patrol, his JACKAL vehicle was struck by an IED, killing Stephen and significantly injuring several of his colleagues in the vehicle. Colin says:

“Steve was a great ambassador for Blind Veterans UK. We are doing this challenge for him”.

Colin and the Royal Welsh regiment had originally wanted to complete several physically challenging events over a planned three-year period however due to the COVID-19 pandemic, they had to reschedule most of these. On Wednesday 26 May, the 9-year anniversary of Stephen’s death, Colin will be launching the next series of challenges. Colin says:

“On the 19 June, we will attempt to break a record of the most blind folded walkers to ascend Snowden and that evening Royal Welsh Veterans will play a charity football match against Aberystwyth Old boys. From the 12 August to 1 September, we aim to complete an international cycling venture from Berlin to the Blind Veterans UK training and rehabilitation center in Llandudno. On the 2 September, “we will attempt to walk blindfolded from Llandudno to Wrexham totalling 47 miles in 24 hours, as we retrace some of the charity route which Stephen completed in 2012”.

Stephen’s partner, Thea Davies, will also be taking on the international cycle from Berlin to Llandudno. Thea says:

“Steve touched so many individuals who knew and met him, he was loved by so many and is truly missed by all.  For myself to have this opportunity to continue his fundraising legacy for Blind Veteran’s UK, alongside Colin, is a great honour. I will join the cycle team and cycle the full 1293.9-mile route from Berlin to Llandudno in August. I will then complete Ironman Wales for the second time on the 12 September which I previously completed in 2014 in memory of Steve”.

“Steve will always have a special place in my heart and to be able to continue to raise money for a charity which he himself supported is the greatest way to keep his memory alive”.