The annual Marham Flyers run, now in its fourth year, raises funds for the RAF’s leading welfare charity, the RAF Benevolent Fund. A record 319 runners signed up to take part with 287 crossing the finish line on the day. 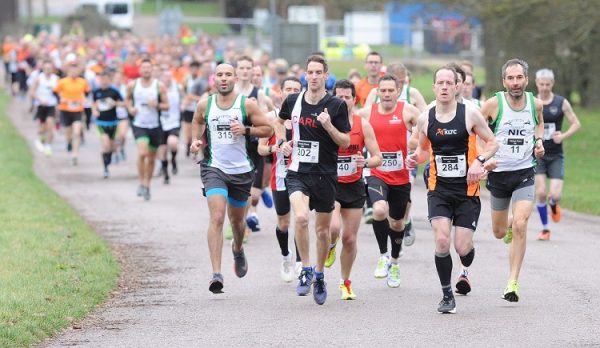 Race organiser Gary Walker said: “We smashed all expectations this year! We like to start New Year celebrations in style with this run, and each of the racers went home with a bottle of beer too.

“As a former RAF Community Support Officer, I understood what the Fund provided for us and that is a huge amount, far more than any other charitable organisation. The Fund is always there, always there for the big projects like the new nursery at RAF Marham. It is also always there for the individual cases. The Fund stood up to help the station and its people.”

Over the past four years, Gary and his team of volunteers have raised in the region of £50,000 for the RAF Benevolent Fund. Something he says could not be achieved without the support of the local community.

He added: “Simply put, this would not be possible without the support of local running clubs and groups turning up to this event.”

This year’s top finishing male was Daniel Guppy, of the King’s Lynn Tri Club, in a time of 35 mins 18 secs. He was closely followed by top female, Amy-Jane Chapman in 42.14.

RAF Benevolent Fund regional fundraiser Lisa Hunt said: “What a brilliant way to see out 2018. Thank you to Gary for his unstinting support and to all the helpers who make this event possible.

“Your inspiring fundraising enables the RAF Benevolent Fund to go on supporting RAF personnel, past and present, and their families.”

A summer event the Marham Flyers Summer Special 10K/Duathlon and children’s 1K will take place at RAF Marham on Sunday, June 9. Plus to mark the RAF Benevolent Fund’s centenary this year, the Somme Poppy Run, on 12-14 July, will raise funds for the Fund.

The Royal Air Force Benevolent Fund is the RAF’s leading welfare charity. We exist to support current and former members of the RAF, their partners and dependants, whenever they need us. In 2017 we spent £18.8m supporting more than 55,000 members of the RAF Family. For more information visit:  www.rafbf.org Twitter: https://twitter.com/RAFBF.