You are here: Home / News / News / Cheshire blind veteran to have artwork featured in military charity’s annual art exhibition after they taught him how to paint

A Cheshire blind veteran is going have his artwork piece “Java the Last Tiger” featured in Blind Veterans UK’s annual exhibition fundraiser this month after the charity introduced him to the craft last year. 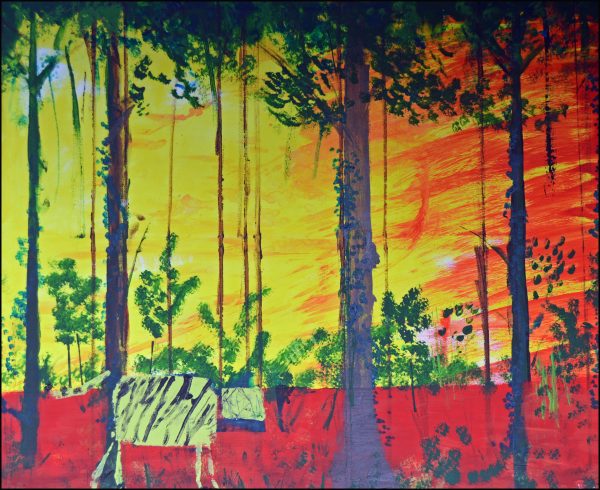 Jon Westerby, 59 and from Northwich, created the piece in three months during the lockdown period. He says:

“I visited the charity’s Brighton centre in July 2019 for a painting week. I had never painted before but I really enjoyed it and found it very relaxing. I saw that the exhibition was happening and I thought I’d enter as a way of giving something back to the charity. Lockdown was hard and this gave me something to do”.

The charity normally hosts an annual art exhibition at their training and rehabilitation centre in Brighton. However due to the COVID-19 pandemic, the decision was made to make it virtual with the auction being hosted on eBay.

Jon’s painting relates to the extinction of the Javan tiger which were hunted to extinction on the Indonesian island in the 1970s. He says:

“The exhibition’s theme this year was ‘Landscape’ so I wanted to make a representation of tiger. It’s meant to be in the jungle with light piercing through the foliage and little birds hidden away. I can barely see the tiger and a lot of the piece involved guess work. For example, I used a piece of wood to help me work out where the trees should be on the canvas”.

Jon served in the Duke of Wellington’s Regiment of the British Territorial Army for two years. He suffers with retinitis pigmentosa in both eyes and started to lose his sight when he had problems with his night vision. He says:

“I heard about Blind Veterans UK in 2018 when I attended a talk at Vision Support Cheshire. There was a speaker there from the charity so I decided to look into it”.

As well as the painting week, Jon has attended many activity weeks since joining the charity. He says:

“You name it, I’ve done it! I’ve done fitness weeks, hill walking in Snowdonia, Sailing – every activity you can think of. I’ve never had the chance to do all these adventures before. The charity has changed my life. I’m looking forward to being able to do all these things again when it’s safe to do so!”