You are here: Home / News / News / From one poppy ride of a lifetime to another for sportive royalty

They overcame hundreds of fellow riders to be crowned the King and Queen of the Heugh at last year’s epic Poppyscotland Sportive, and now the two cycling stars have enjoyed the fruits of their success having received a truly unique, money-can’t-buy prize, namely a day with the Queen’s Pony.

Chris Howie, 48, from Edinburgh, and Helen Wall, 26, from Invergowrie, conquered a tough hill climb during the charity’s annual cycling fundraising event, which takes place in East Lothian, in September. Now, following their impressive show of endurance, the two successful cyclists won the chance to spend the day with Corporal Cruachan IV – a ten-year-old black Shetland pony, which has been the Queen’s Pony since October 2012.

Cruachan IV is the Regimental Mascot of The Royal Regiment of Scotland and lives at Redford Barracks, in Edinburgh. In recent times, he has become quite the media magnet having participated in a plethora of high-profile events. For example, Cruachan IV, who is looked after by the Pony Major, welcomed Prince Harry and Meghan, the Duchess of Sussex, to Edinburgh Castle last year; he carried out ceremonial duties at Buckingham Palace; he attended the ‘Support Your Services’ day at Musselburgh Racecourse; and he has taken part in five Edinburgh Military Tattoos.

The ‘Royal Engagement’ took place on Saturday at the barracks, with Chris bringing along his three children – Amy, eight; Calum, six; and Holly, three – while Helen was accompanied by three of her close friends. After meeting Cruachan IV, the attendees groomed and got him into his ceremonial uniform. Then, after a flurry of pictures, Cruachan IV was saddled up and the youngsters were given the opportunity to ride him. After a well-earned lunch in the Officers’ Mess, it was time to sort out Cruachan IV’s feed and to get him ready for his evening routine. 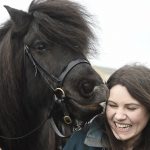 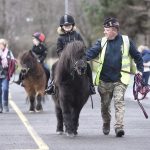 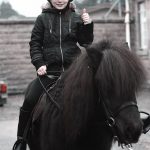 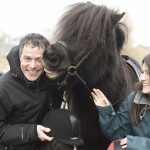 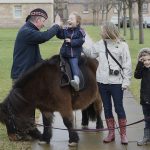 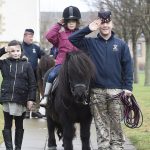 Chris, who works as a primary school teacher in Penicuik, admitted there were three reasons why he gave it his all on the hill climb. He said:

“My three kids absolutely love ponies and have been so thrilled to meet Cruachan today, which has felt like payback for all the Saturday mornings I’ve missed while cycling! When I was battling up that hill, I kept pushing myself knowing they would love it – and they have. They knew today’s itinerary by heart and have spent weeks telling all of their friends about it. We want to thank Poppyscotland and the Royal Regiment of Scotland for such a generous prize.”

It was the first Poppyscotland Sportive for Chris, whose grandfather served as a Major in the Black Watch, and he absolutely loved it, adding:

“It’s a wonderful route and a challenging ride, and I am already looking forward to 2019’s event. Strangely, short hill climbs are my thing and I just went for it while trying not to think of the 90 miles still to come!”

Helen, who was also riding in her first Poppyscotland Sportive, admitted she nearly missed the chance to post a competitive time on the hill climb. She said:

“I thought the hill climb was a brilliant addition to the Sportive… even though I almost missed it! Thankfully, someone shouted from the sidelines, so I started to sprint, and I found myself chasing another rider up the hill. It’s good fun when short sections are thrown in during a long ride, and I hope to see some more challenges next time around.”

“To meet Cruachan has been a brilliant and unusual prize. I’ll certainly never forget the experience. Poppyscotland is such a worthy cause and I cannot wait to participate in this year’s Sportive. In the meantime, please keep up the good work, Poppyscotland!”

Katriona Harding, the Events Fundraising Manager and the organiser of the Poppyscotland Sportive, said:

“We are over the Moon that the Royal Regiment of Scotland was so generous in donating this ‘money-can’t-buy’ prize for our amazing supporters. I want to offer a huge thanks to Mark Wilkinson, the Pony Major, who facilitated this trip. It has given our Sportive King and Queen, and their family and friends, such a memorable and unique experience.”

It was the first time that the Poppyscotland Sportive had featured a timed hill climb, just outside North Berwick. ‘King’ Chris overcame 669 other riders to record a time of 25 seconds up a steep hill called the ‘Heugh’ – a full second faster than his nearest rival. Meanwhile, ‘Queen’ Helen put even more distance between herself and the competition, chalking up a time of 37 seconds, which bested her rivals by a full three seconds.

Best known for running the iconic Scottish Poppy Appeal, Poppyscotland reaches out to those who have served, those still serving, and their families at times of crisis and need by offering vital, practical advice, assistance and funding. The charity believes that no veteran should live without the prospect of employment, good health and a home, and we all have part to play in achieving this.

Poppyscotland provides life-changing support to the Armed Forces community. Money raised from the Scottish Poppy Appeal and Poppyscotland’s year-round fundraising enables them to deliver support to members of the Armed Forces community in Scotland by providing tailored funding and assistance. The charity also funds services in advice, employment, housing, mental health, mobility and respite. Please note that we are known as “Poppyscotland”, and not “PoppyScotland” or “Poppy Scotland”. For more information, please visit us at: www.poppyscotland.org.uk.