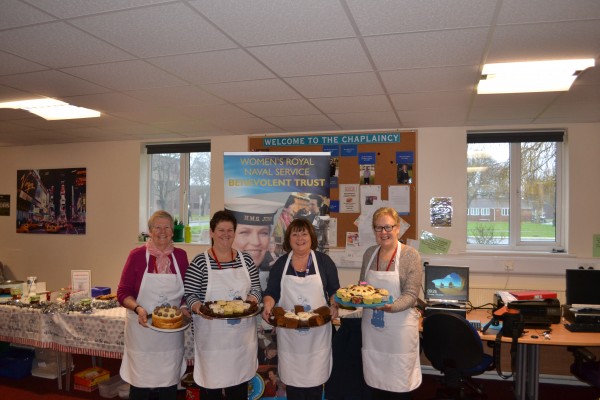 Personnel across HMS Collingwood were treated to cakes and other home-made goodies at the Base’s annual WRNS BT Festive Sale.

The Women’s Royal Naval Service (WRNS) celebrated its centenary on 29th November 2017 and events have been going on all year to commemorate this Anniversary, the women who served throughout this time, and their remarkable achievements.  Five volunteers from The Women’s Royal Naval Service Benevolent Trust (WRNS BT) visited HMS Collingwood to tempt sailors and civilians alike with brownies, malt loaves, cakes, biscuits and even jars of marmalade, all home-made by ten talented members.

Another table offered the chance to buy beautiful Christmas cards, calendars, tea towels and lots more WRNS100 memorabilia, including a poem written by former Wren Ollie Butler. Ollie writes and performs her own poetry, and has written an ode to mark the WRNS100 celebrations which she performed in front of HRH The Princess Royal at this year’s Annual General Meeting of the Trust. Copies of Ollie’s poem can be obtained from o.butler@ntlworld.com, telephone 02392 366508, or from the WRNS BT (www.wrnsbt.org.uk) at a cost of £4.50.

The volunteers were also delighted to receive £345.00 from HMS Collingwood’s Chaplaincy staff, who donated the proceeds of two weeks’ bacon butty sales to this excellent cause.

The WRNS BT provides relief in cases of necessity or distress among its members and their dependants. A member is anyone who was serving in the Women’s Royal Naval Service and transferred to the Royal Navy on 1 November 1993, or anyone who has served in the WRNS since 3 September 1939.

Sarah Ayton, General Secretary of the WRNS BT said, “It was very kind of the staff at the Chaplaincy to invite us back again this year, and to donate the proceeds from their marvellous bacon butty sales. Our bakers did really well, and all the cakes looked and tasted delicious.”

Cake Sales were held across the Base in the Chaplaincy, the Sports and Recreation Centre, the Main Gate and the Wardroom and the total raised on the day was an amazing £660.81.