You are here: Home / News / News / Life after the army – how one former soldier retrained as a Yachtmaster

The transition from the military to the civilian world of work can be a daunting process for the estimated 20,000 personnel leaving the Armed Forces each year. Creating a new life can be complicated and, in some respects, be like starting again from scratch.

Tony Yeardley served more than 12 years in the army before he was medically discharged in 2013. During his military career he completed six tours in Iraq and Afghanistan and was looking for a more stable life and new opportunities since arriving back home.

By chance, while at a recovery centre he met Turn to Starboard founder Shaun Pascoe who convinced him that his military skills of leadership, teamwork, discipline and acceptance of responsibility could also be applied to marine industry.

Five years later Tony is now a qualified RYA Yachtmaster, having taken full advantage of the support on offer from Turn to Starboard and is enjoying a new life he didn’t initially expect.

How did you find out about Turn to Starboard?

I was having a few issues at a recovery centre one evening when I bumped into Shaun. After chatting for a few hours he told me about the sailing charity he was setting up which sounded great, and although I wasn’t sure what I wanted to do when I left the army I knew I wanted to be outdoors, so I arranged to visit him a few months later.

When I first arrived at Turn to Starboard it was a very big step for me as I was dealing with my own recovery. Yet I immediately felt the therapeutic effects of being out on the water and started to sail on a regular basis while helping out with maintenance on the Spirit of Falmouth – a 92-foot tall ship owned by the charity.

Being a ‘hands-on’ kind of person rather than someone who sits in a classroom learning the theory side of sailing was challenging at times, yet thanks to the patience of everyone at the charity I went on to pass my Day Skipper qualification the following year. It showed me that I did have the confidence and skills to get through which felt great.

What other sailing expeditions have you been involved in?

After taking part in regular sailing trips at Falmouth, I was asked to take part in a one-week sailing experience in Corfu which was amazing. We spent a week learning new skills while sailing around the stunning island with hidden coves and beautiful beaches.
Next I was invited by the charity and Help for Heroes to take part in the famous Rolex Sydney Hobart Yacht Race. Sir Robin Knox-Johnston, the first man to sail solo and non-stop around the world joined us on-board navigator which was pretty special too. After one week’s training in Hampshire we flew to Australia for further training on a 70-foot Clipper and set off on the 628 nautical-mile race from Sydney Harbour to Hobart in Tasmania. It was challenging to race such a highly-tuned yacht at full tilt over some of the most difficult seas in the world, yet out of 107 yachts in the race we managed to finish in 49th place! It was an amazing experience and I learned new skills and racing techniques which I brought home and am passing on to others who are learning to sail at the charity.

Also, earlier this year I sailed a 2050-mile leg from Croatia to Alicante in Spain as part of the charity’s Croatia to Cornwall endeavour. The trip was also a huge learning experience and helped to build my confidence even further while regaining the sense of responsibility I used to have in the forces.

You recently passed your RYA Yachtmaster exam. How did that feel?

To be honest it felt like a monkey was finally off my back! To achieve a level where you can be called an RYA Yachtmaster is absolutely fantastic, yet I also appreciate that this where the real sailing starts and I have a lot more experience to gain before I progress onto bigger and better things. Being involved with Turn to Starboard has opened a lot more doors for me and allowed me to plan for the future.

What are those future plans?

I hope to get my Yachtmaster Motor Cruising qualification by the end of this year, and in the meantime I aim to give something back to the charity by working with others who are preparing for their Yachtmaster exams and helping out with sailing courses. For the future I’m potentially looking at becoming a diving instructor somewhere in the Med while teaching motor cruising.

Why is sailing so special?

Turning the engine off, setting the sails and listening to the water hit the bow is simply the most beautiful sound in the world.

For more information about the charity call 01326 314262 or visit turntostarboard.co.uk. 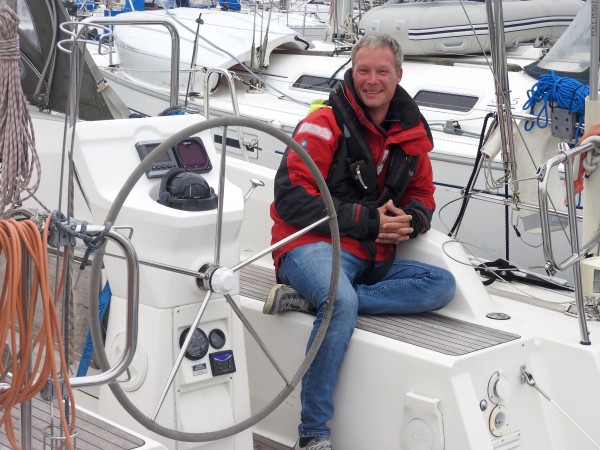