RAF Honington recently opened its social club, following a regeneration of the facility made possible by a £29K grant from the RAF Benevolent Fund. Formerly known as the Honington Families Club, the funding means that the station now has an enticing space for serving personnel and their dependants to use for an array of social activities. 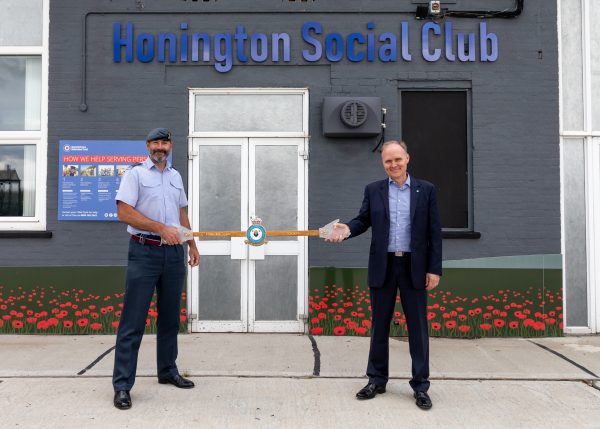 Prior to support from the Fund, the families club was underused, tired and uninviting. The charity funding allowed for the facility to be revamped, from re-laying the front car park and making the internal space more sociable, to providing suitable flooring and fold away furniture. The Club also boasts a multi-media room for serving personnel and older children to use, allowing them to socialise and encouraging them out of their rooms.

“It’s a real privilege to officially open our new Honington Social Club. Before the significant support from the RAF Benevolent Fund, there was an inadequate provision for socialising across the community, leading to social isolation and over-stretched facilities. With thanks to the Fund, the Club allows us to tackle those issues head on, repurposing existing welfare facilities to increase community support, allow for a greater scope of activities and provide much-needed additional space. Owing to the support from the Fund, RAF Honington is now better placed to provide for serving personnel and the wider RAF Family, creating a safer, more comfortable environment for all.”

Jason Shauness, Director of Fundraising and Communication at the RAF Benevolent Fund, also celebrated the project:

“I’m delighted that we have been able to support the refurbishment of the RAF Honington Social Club. We know that as a busy station, there are pressures on serving personnel and the wider RAF community that are based here. To be able to help alleviate some of that pressure is exactly what we’re here for. We’re proud to have made a commitment to those based at RAF Honington and illustrate the practical ways in which we’re here to support the RAF Family.”

Since 2019, the Fund has spent more than £86K supporting personnel at RAF Honington, providing emotional, practical and physical support to those in need.