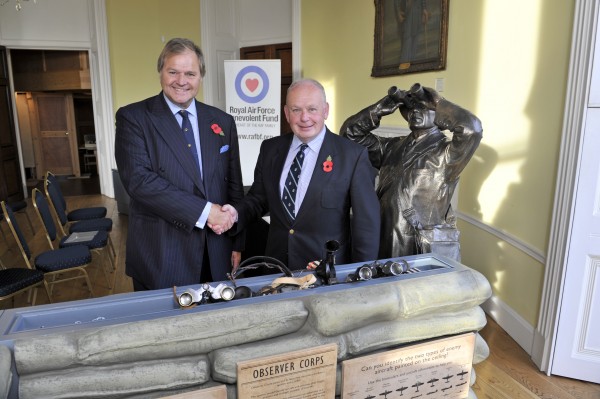 The RAF Benevolent Fund is delighted to announce the Royal Observer Corps Benevolent Fund has been taken under its wing and will be absorbed by the RAF’s leading welfare charity.

The merging of the two charities builds on the close partnerships and excellent relationships developed over several years.

A small but significant event to mark the official handover took place Bentley Priory, the spiritual home and headquarters of the Royal Observer Corps from July 1936.

Former ROC veterans eligible for help from the ROC Benevolent Fund will now be supported by the RAF Benevolent Fund and will be entitled to the additional welfare initiatives the Fund provides. These include a wider range of financial grants, services such as advice and advocacy, welfare breaks at Princess Marina House (the Fund’s respite care home on the south coast), telephone friendship groups and the Fund’s new bereavement support service.

Air Commodore Paul Hughesdon, Director of Welfare and Policy at the RAF Benevolent Fund, said: “The RAF Benevolent Fund is delighted to welcome members of the Royal Observer Corps into the wider RAF Family and under the wing of the RAF’s leading charity. The convergence of the two charities is in the best interests of ROC Benevolent Fund beneficiaries as it gives them access to a greater scope of help.

“I am pleased to cement the close ties of the two Benevolent Funds and as a result continue to support the ROC veterans and their families in their time of need.”

Chairman of the ROCBF Trustees, Christopher Howard, said: “Since its creation in 1945, the ROCBF has always been on hand to help former Observers, and their dependants, in times of need. The Trustees were very mindful of the need to ensure robust arrangements for the future, and so this is a very prudent move.

“We are so pleased, and indeed reassured, that the remaining former members of the ROC who served the nation so well will continue to be cared for, as part of the wider RAF Family, by such a hugely respected charity as the RAF Benevolent Fund.”

Originally known as the Observer Corp, they were awarded Royal status in 1941 in recognition of their crucial role during the Battle of Britain. Their information about incoming enemy raids over land supported the information coming from the radar stations and played an integral part in the defence of the United Kingdom.

The Royal Observer Corps stood down from its duties in 1995 after 70 proud years serving in war and peacetime. Many thousands of men and women – more than 200,000, in fact – gave valuable service over that time. It is estimated that there are still some 60,000 former members eligible for support. Their dependants may also be eligible for assistance.