A major new study released today by the Veterans Work consortium, reveals that military service is likely to improve your chances of finding employment.

The study found that, contrary to what many believe, veteran employment rates at 81% are far higher than the national average of 75.5%.

The report, titled ‘Veterans Work: Moving On’, surveyed 1,786 UK veterans who had transitioned out of the military in the past 10 years.

Veterans Work, made-up of leading professional services firm Deloitte, the Armed Forces charity the Officers’ Association and The Forces in Mind Trust (FiMT), is a consortium of organisations whose collective aim is to improve the understanding of veteran employment.

A separate poll of 2,849 UK civilians, conducted in June of this year, revealed a startling disconnect between perception and reality when it comes to the mental state of veterans and their chances of employment as they re-enter the workplace. The YouGov poll commissioned by FiMT and the Ministry of defence, found that an alarming 64% of civilians think that veterans are more likely to suffer from more mental, physical and emotional issues than those who have never served.

The YouGov report also found that 39% of employers believe veterans are more likely to be ‘institutionalised’. Additionally, 30% thought that serving in the Armed Forces ‘damages people’.

Lee Holloway, Chief Executive of the Officers’ Association said: “There is a clear gulf between how the public perceive veterans and the reality. Veterans are more likely to be employed for instance, regardless of disability or mental health.

He continued: “It is possible that this disconnect is in part being driven, unintentionally, by some of the messaging. High profile media campaigns drawing attention to real issues facing sections of the Armed Forces community, whilst well-meaning, can at times serve to perpetuate stereotypes that do not reflect the majority.”

Chris Recchia, Partner at Deloitte and Chair of the Veterans Work Consortium said: “Persistent negative stereotypes do unfortunately affect wider societal perception of the veteran community. While it is absolutely true that some veterans have suffered and continue to suffer, this does not reflect the experiences of the majority.

He continued: “In short, this data dispels those negative stereotypes. Our study found veterans are highly employable due to the hard work, determination, flexibility in where they work and critically, a willingness to try a whole new career.”

However, while employment rates for veterans are higher than the national average, Veterans Work: Moving On found that more than a quarter (26%) of veterans living in Wales, Scotland and Northern Ireland said they had found the process of finding the employment ‘very difficult’.

It was a different story for veterans who had chosen to reside in the Capital however, with less than 1 in 10 (9%) in London describing the experience as ‘very difficult’.

Half (50%) of those veterans who live in London, describe their experience of finding the right job as ‘easy’. Despite the relative ease of finding jobs in the capital, just 8% of veterans are now living in London.

Troublingly, 27% of female respondents described the process of finding employment as ‘very difficult’; for men, the figure was just 17%.

The most popular place for veterans to live is in the South West, with nearly a quarter (24%) of respondents living there. This reflects the fact that the region is home to some of the most populated military bases.

Speaking as the report was unveiled, Air Vice-Marshal Ray Lock CBE and Chief Executive of the Forces in Mind Trust, said: “The transition out of military service into civilian life is most successful when all the elements, such as housing and employment, are tackled early, and holistically. It’s important that these challenges are, though, represented in a balanced and proportionate way. Understanding the needs of the minority who do struggle should be set alongside the successful outcomes for the majority. There is plenty of evidence to show that the public and employers hold inaccurate perceptions of the ex-Service community. The efforts of the Veterans Work consortium should help redress the balance.”

Tobias Ellwood, Minister for Defence People and Veterans, said: “Those who have served in our armed forces leave with a fantastic range of transferrable skills, including leadership, team work and resourcefulness.

“Organisations can benefit significantly from their experience, and so it’s important we dispel the myth that veterans are somehow damaged by their service. We will continue to support our service leavers in whichever route they choose to take, through initiatives such as our Career Transition Partnership.” 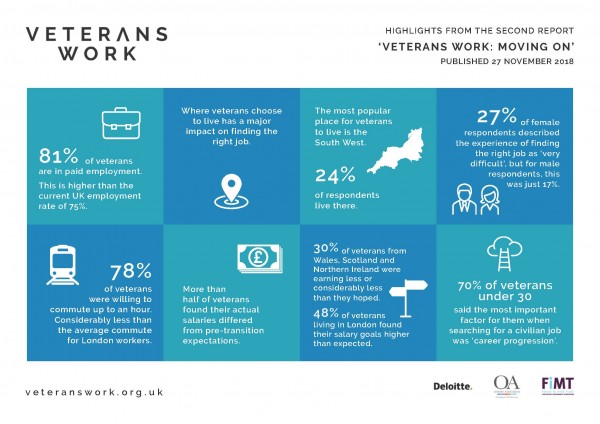