You are here: Home / News / News / Covid: Life on the frontline: Virus ordeal left sick mum fearing for her life

A Care Home Administrator and mum-of-two has revealed how she thought Covid would kill her after contracting the virus and falling seriously ill during the first outbreak. 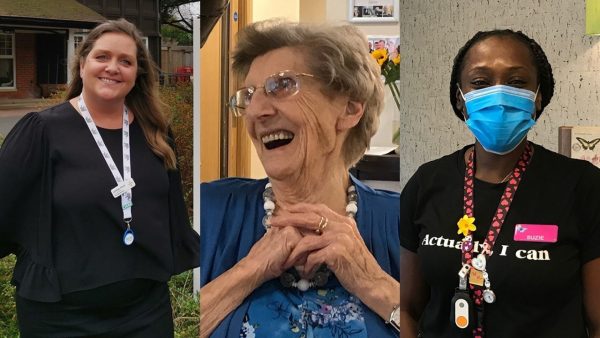 Lindsay Hood, from Banstead, Surrey, said that at its worst, she was afraid to sleep for fear of not waking up again.

Also featured in the latest Life on the frontline series is 102-year-old Ena Mitchell, a resident at the charity’s High Wycombe Home, and Suzie Bignall, a Health Care Assistant at the same Home.

Lindsay, Home Administrator at the charity’s Surbiton Home, described Covid as “being hit by a bus”. She was bed-bound and in immense pain for over four weeks, and the 49-year-old said:

“I got really scared. I was terrified of going to sleep because I didn’t think I would wake up.” When the ambulance crew turned up at her home in full PPE to take her to hospital, she said: “I honestly didn’t know if I was going to go home again.” Looking back at her ordeal, she said: “I was convinced I was going to die. My husband Steve and I had awful conversations about what would happen.”

Lindsay would later develop post-traumatic stress disorder (PTSD) as she dealt with the psychological impact of the virus.

In High Wycombe, Ena praised the Home’s staff, saying they “couldn’t have done more if they tried”, and said she had no concerns for her own life:

“I’ve never worried because I think I’ve had a jolly good life and I’ve got everything to be thankful for… Maybe it’s my upbringing because my mother used to say ‘Whatever’s planned out for you usually happens.’ So I don’t worry.”

Suzie spoke of her initial fears and bursting into tears when the daunting realisation of the pandemic hit her. But she said the situation had brought staff closer together, and improved the care they provide. She also said her colleagues ensured her 50th birthday wasn’t forgotten when they threw a surprise party:

Royal Star & Garter provides loving, compassionate care to veterans and their partners living with disability or dementia. It published its first batch of Covid: Life on the frontline accounts in October.