You are here: Home / News / News / A knight in shining armour for the Armed Forces

A knight in shining armour for the Armed Forces 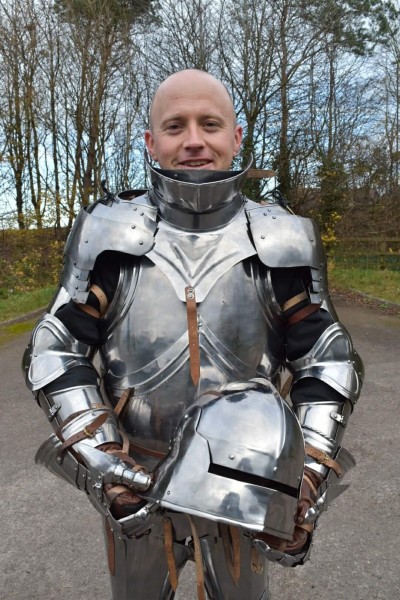 However, unlike most London Marathon participants who will be wearing their ‘usual’ sporting apparel, 33-year-old Paul has decided to wear a suit of armour, made up of 35k worth of steel plates, whilst running the gruelling 26.2 miles.

In doing this, Paul is hoping to break the current Guinness World Record for the ‘fastest marathon in a suit of armour’, by finishing in under 6 hours and 46 minutes.

Paul, who has worked in the Intelligence Corps since 2004 has already completed four Ironman Triathlons, and wanted to set himself a new challenge.

He felt inspired to carry out this challenge on behalf of SSAFA, having witnessed first-hand the ways in which the charity provides help and support for the military community.

Speaking about the challenge ahead, Paul says:

“I’ve wanted to do a charity event for quite some time, but I knew it would be hard to get people to sponsor me for doing what I enjoy. I decided that I needed to find a challenge that would not only get a lot of support but also provide me with the challenge I was looking for.

I saw last year’s marathon and how many world records were broken, which got me looking into the records that were out there and that I could potentially beat. I found the record for the fastest marathon in a suit of armour and went from there.

I’m trying to break the world record for the fastest marathon in a suit of armour. This currently sits at 6hrs 46mins and 59sec, and the record has stood since 21 Sep 2008.  Having started training in my armour, I can see why!

It seemed like a brilliant idea at the time, but now the realities are sinking in. I can’t just slip the armour on and head out by myself, I need help to get into it, and nearly every step I take in it hurts. But I have no doubt that I will finish the marathon – and am quietly confident that I’ll have a good chance of breaking the record too!

I’ve seen some of the things that SSAFA have done and thought that they were the charity for me. One of my friends from a previous unit in Germany was diagnosed with breast cancer. SSAFA flew her Mum out to Germany and provided accommodation for her whilst she was going through the initial stages of treatment prior to returning to the UK.”

“Every mile that Paul runs will make a difference to the lives of our Forces and their families, with all money raised going towards helping continue the vital work of SSAFA, the UK’s oldest military charity.

We wish him the best of luck with the rest of his training and we will be at the London Marathon in April to cheer him on as he attempts to break the current World record.”