You are here: Home / News / News / Surbiton carer receives BEM for services to veterans during Covid-19

Surbiton carer receives BEM for services to veterans during Covid-19

A long-serving Royal Star & Garter carer has received his British Empire Medal at an investiture ceremony in Guildford. 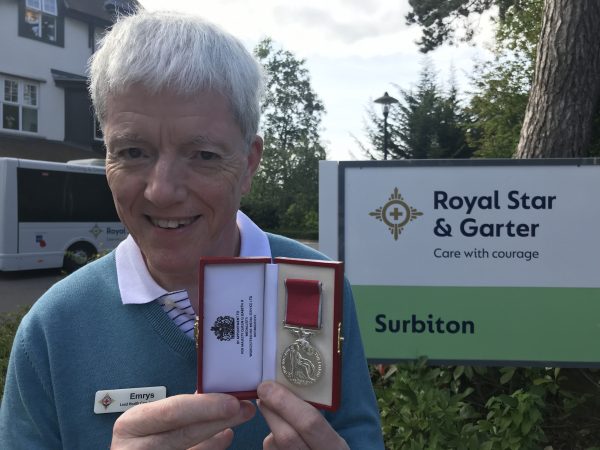 Lead Healthcare Assistant Emrys Owen was given his medal at Loseley House by the Lord Lieutenant of Surrey, Michael More-Molyneux, on Monday 20 September.

Emrys was awarded the BEM for services to veterans during Covid-19 in The Queen’s New Year’s Honours List 2021.

He joined Royal Star & Garter nearly 40 years ago in 1982 and was originally based in Richmond. He has worked at the charity’s award-winning Home in Surbiton since 2013.

“I would say receiving the BEM was the proudest moment of my working life. When my citation was read out I nearly cried. I had to really try to stop the tears when I collected the medal.”

Director of Care Pauline Shaw, who herself has been with the charity for 20 years, said:

“Emrys is an outstanding carer. He is dedicated, compassionate, and leads by example. We have been lucky to have him for so long, and we’re all immensely proud of him. I’m delighted that his hard work has been acknowledged in this way.”

“I count my lucky stars to have Emrys on my team. He’s a remarkable Lead Healthcare Assistant and a great role model. Everyone at the Home is delighted for him.”

Michael, an RAF veteran cared for at the Surbiton Home, who himself has an MBE for services to Scouting, said:

“His devotion to his work is extraordinary. Emrys takes tremendous care in looking after residents, and I’m delighted that it’s now been recognised by Her Majesty The Queen.”