You are here: Home / News / News / Lancashire blind veteran to march at Cenotaph on Remembrance Sunday

Lancashire blind veteran to march at Cenotaph on Remembrance Sunday 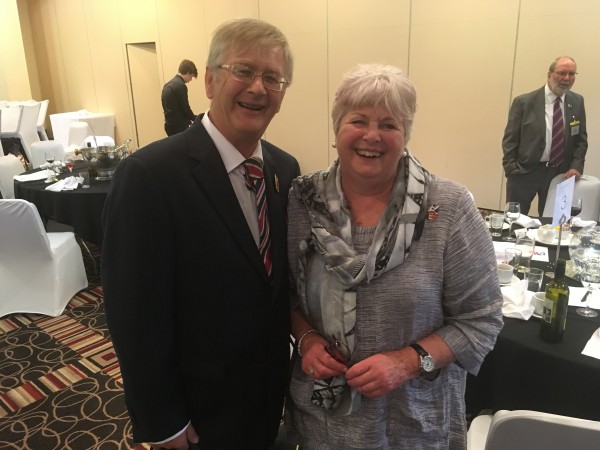 A blind veteran from Lancashire is set to march at the Cenotaph in London this Remembrance Sunday (12/11) with the charity Blind Veterans UK.

Graham Ward, 59 and from Fleetwood, is being supported to do this by Specsavers. Specsavers stores across the country will be raising money from 6 to 12 November to help send blind veterans, including Graham, to march.

Graham will be marching at the Cenotaph in London with more than 100 other blind veterans supported by Blind Veterans UK, the national charity for vision-impaired ex-Service men and women.

Graham says: “Remembrance means everything to me. It puts into perspective my own Service and brings it all back. To be able to march with men and women who’ve also served is fantastic.

“I’ve been fortunate enough to have marched once before and it’s the kind of thing that sends shivers down your spine. I can’t wait to do it again this year.”

Graham was in the Royal Air Force (RAF) from 1975 to 1976, serving at RAF Wittering, Cottesmore and Brize Norton as a Steward. He recalls: “I was only a young boy on entry, just 16 and a half. But I made some good memories and some great friends, many of whom I’m still in contact with.”

Graham was discharged as a Leading Air Craftman on 15 September 1976, but it wasn’t until 3 January 2005 that he was diagnosed with glaucoma. He explains: “I was in the hospital, recovering from a heart attack, when I lost all the sight in my left eye. I remember thinking to myself, ‘It’s OK, I’ve still got my right eye so I’ll be fine’. Unfortunately, however over the past ten years that has started to deteriorate too.

“I’ve now got no peripheral vision, it’s like looking through the eye of a needle. It was extremely hard to come to terms with.”

Soon after visiting an eye specialist at the charity’s headquarters, Graham became a part of the charity, a moment he recalls as being profoundly bittersweet. He explains: “It was fantastic news to hear I’d been accepted by the charity, but at the same time, I’ll never forget being told that it was inevitable I’d lose my remaining sight.”

Since becoming a part of the charity, Graham has immersed himself in the variety of activities available. He says: “I’m not hugely sporty, but other than that I’ve been doing anything and everything I can, including visiting its training and rehabilitation centres and taking part in Art and Craft weeks.

“I also met my partner, Lindy, through the charity. She’s also a blind veteran and so far we’ve been trying out absolutely everything together! We’ll be marching at the Cenotaph together too, which we’re both extremely excited about.”

The charity has also provided Graham with a range of equipment. He explains: “The list is endless; I’ve received magnifiers, glasses, talking scales, talking telephones and talking watches. I can now add onto that list, girlfriend, and yes, she talks too!”

Aside from the equipment, Graham maintains that the emotional support he’s had has been of paramount importance. He says: “Getting out of depression was key for me. It set in really badly during the first couple of years, and it was Blind Veterans UK that helped pull me out of that.

“Before the charity came along I was just sitting in my house all day, staring at the walls and trying to make of life what I could, but the motto of the charity is life after sight loss and that’s how I’ve started to live my life. You get out there and do the best you can.”

Graham continues: “I’ve had a better life since losing my sight than I had before. I’ve met some really nice people who’ve been through a lot worse than I did. At the end of the day my sight loss is age-related, but so many of the charity’s veterans have lost their sight while serving in horrendous incidents. For me, it helps put things into perspective.”

Graham is set to march with other vision-impaired ex-Service men and women supported by Blind Veterans UK as part of the national Remembrance Sunday commemorations in London on Sunday 12 November 2017. Specsavers stores across the UK will be fundraising from 6 to 12 November on behalf of Blind Veterans UK to help Graham, and others like him, march at the Cenotaph.