The Taxi Charity was saddened to hear the news that WWII veteran Eric Alexander Taylor BEM from Helston in Cornwall had died on 21 February. 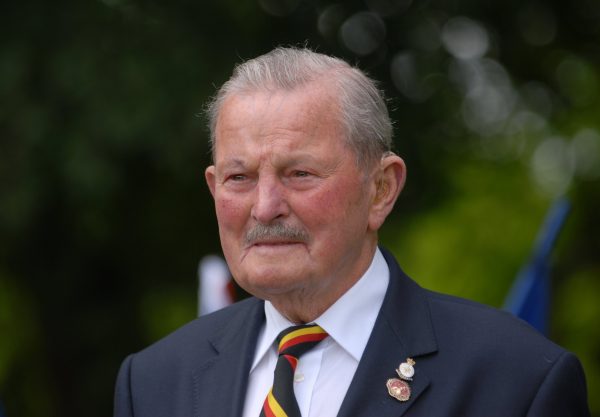 Eric Taylor BEM, the last survivor of the 7thBattalion, Royal Norfolk Regiment, who were part of the 51st (Highland) Division’s retreat to St Valery in June 1940, has died. WWII veteran Eric Taylor, who was originally from Kings Lynn and who celebrated his 100th birthday last June, sadly passed away on 21 February. He was taken POW when the Highland Division had to surrender and spent the rest of his war in Poland.

After the war Eric met the cousin of a friend, Florrie, a Cornish lass and they married, and settled in Cornwall where Eric played the trumpet in the St Keverne Brass Band, an association that was to last nearly 70 years. In 1982 they moved to Helston and sadly Florrie passed away in 2003.

“Eric returned to St Valery for the 70th Anniversary and joined the Taxi Charity on our 2012 trip to commemorate the Liberation of The Netherlands. Eric was one of life’s characters and wonderful company. The Taxi Charity wanted to take Eric back to St Valery in 2020 for the 80th anniversary but due to Covid restrictions this was not to be.”

In June 2020 Eric enjoyed a special socially distanced 100th birthday celebration as he stood in the front garden of his home in Helston, Cornwall. Dozens of well-wishers drove or walked by and a brass band surprised him with a special rendition of ‘happy birthday’ while two fighter jets from a nearby Royal Navy base also flew overhead.

“After 100 years grandad passed away at his home in Helston. A true legend, a remarkable life, a smile to melt and loved by many. He was also my hero and I am heartbroken. Eric Alexander Taylor, BEM, 1920 – 2021. Cheers old boy.”

“The Taxi Charity has lost another member of our charity family and we send our deepest condolences to Eric’s family. God Bless you and thank you for your service.”