You are here: Home / News / News / 100 year old WWII Veteran to Mark D Day in Worthing instead of Normandy

Major Edwin ‘Ted’ Hunt MVO usually marks D Day on 6 June in Normandy with The Taxi Charity for Military Veterans. This year plans were in place for Ted to join the charity’s annual trip to France, but due to the COVID 19 pandemic, the plans had to be cancelled. 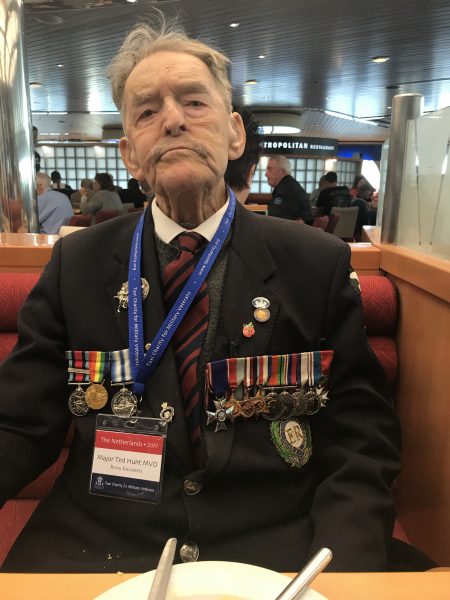 Having already missed celebrations for his 100 birthday on 23 March and the 75th anniversary of VE Day on 8 May, because of the pandemic restrictions, Ted is determined not to miss out again and plans are in place for him to mark D Day on June 6.

For Ted to safely break his lockdown, arrangements are being made to take him in a disinfected London Licensed Taxi from his home in Sompting, West Sussex on the short journey to Worthing War memorial on Saturday 6 June so that he can mark the occasion by laying a wreath and remembering those who did not return.

“I missed celebrating my 100th birthday on 23 March and the 75th anniversary of VE Day on 8 May but D Day is something that I must mark if I possibly can. I am so disappointed that the usual group of WWII veterans have been unable to travel with the Taxi Charity to Normandy this year and I am determined to place a wreath and pay my respects to those who didn’t make it home”

Ted is being driven from his home in West Sussex, by London Taxi Driver and charity volunteer Mike Hughes who lives in Worthing and is Ted’s regular driver and companion on the outings organised by the Taxi Charity for Military Veterans.

“After taking Ted to various events I’ve grown very close to him and I know how disappointed he was to miss the celebrations for both his 100th birthday and VE Day. We spoke recently and with the easing of the lockdown rules, decided that we could try to mark D Day at the Worthing War Memorial instead of in Normandy as we have done in recent years. My London licensed black cab, with its separated passenger compartment, is probably the safest way to take Ted on this short journey and we will ensure we adhere to the social distancing requirements at all times.”

Born 23 March 1920, apprenticed to his father as a Waterman 1935 on the River Thames he learned to tow Thames Barges with a rowing-boat. Following the outbreak of WWII Ted volunteered with the Royal Engineers and served in the Battles of Narvik, Norway April–May 1940.

By 1944 he was commissioned, and as a Captain, commanded 15 of the Rhino low draft ferries on Gold Beach on D-Day. In four months, these landing craft put ashore 93,000 units (tanks, guns and vehicles) and 440,000 tons of military stores.

During the last six months of the war in Europe, together with the Dutch hydraulics engineer Lt. C. L. M. Lambrechtsen van Ritthem, he advised the Chief Engineer Second Army, Brigadier “Ginger” Campbell, on the “opposed crossing of water obstacles”, so that the longest floating Bailey bridge of the Second World War could be constructed at Gennep in the Netherlands. This bridge over the river Maas (Meuse) was 4,008 feet (1,222 m) long and was opened on 19 February 1945.

Demobilised as a Major he returned to civilian life as a college lecturer in navigation and watermanship at the City and East London College in London, from 1948 until 1985.

As a Royal Waterman, he was appointed Queen’s Bargemaster in 1978 and retired from royal service as a Member of the Royal Victorian Order in 1990

Ted’s sister Emily died on 16th May, aged 104. The family have not been able to book a date for her cremation due to the numbers that have died in or near Herne Bay.

About The Taxi Charity For Military Veterans

In addition to volunteering with the Taxi Charity, Mike is also the Independent Taxi Coordinator for the free Poppy Cab taxi service for veterans going to and from the annual service of remembrance each November in London.