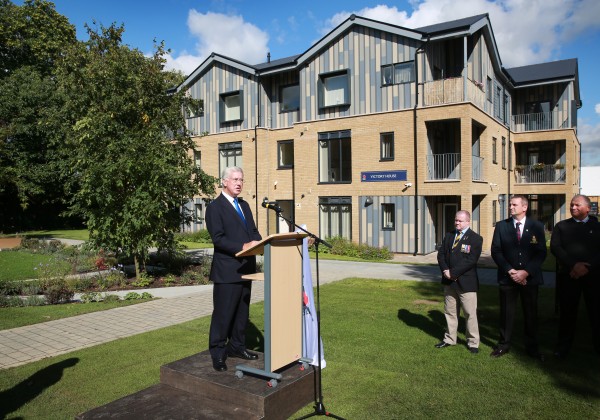 The Secretary of State for Defence, Sir Michael Fallon, has today opened Royal British Legion Industries’ new £4m apartments for injured veterans. The apartments, which were funded by the Government through The Libor Fund and four corporate donors, including the Morrisons Foundation, were officially opened at a grand event on Friday with over 250 attendees.

Situated on Hermitage Lane near Maidstone, the apartments have been built specifically for veterans who are wounded, injured, sick, or at risk of homelessness. The houses host 24 one and two-bed flats, all with special adaptations to make the lives of those with disabilities easier.

Named Victory House and Invictus Games House – the latter after the international sporting event for wounded, injured and sick Service personnel, both serving and veterans – the apartments are the first phase in the charity’s initial plans to build a Centenary Village which they aim to open in 2019 – their centenary year.

Future plans include the construction of further accommodation, including three and four bedroom houses to ensure service families have a stable home, an assisted living scheme to offer help to more injured and disabled veterans, and a state-of-the-art community centre which will offer welfare, support and training.

“During their service our veterans have made enormous sacrifices to keep Britain safe and they deserve the very best support. The apartments will provide those veterans in need with a supportive community and accommodation.

“The Government is unwavering in this nation’s commitment to our Armed Forces community, and we are extremely proud to work with the RBLI and other charity partners who play a vital role in delivering support services for the men and women of our Armed forces.”

Donors to the village include The Libor Fund from the Government, the Morrisons Foundation, ABF – The Soldiers’ Charity and Garfield Western Foundation.

The two apartment blocks, which were designed by Clague Architects, will surround a former gold-medal winning Chelsea Flower Show Garden, created by renowned designer Jo Thompson.  It has been kindly donated by the Chelsea Barracks Foundation, whom also funded the training of two horticulturalists who both now live and work on RBLI’s village.

The Morrisons Foundation, a charity set up by the supermarket, made a donation to furnish the apartments with specially adapted equipment for veterans who have serious injuries.

RBLI’s Chief Executive Steve Sherry CMG OBE, who served in the Army for 38 years, said there clearly remains a problem with some veterans finding secure and sustained accommodation.

He added: “We have existed for almost a century. In that time, through the collaborative efforts of the military charity community, we have helped thousands of veterans and their families secure employment and housing to stabilise their lives following their transition to civilian life after service.

“This could not have been achieved without the ethos we share with our friends in the military charity sector with whom we do all we can to help our brave servicemen and women on their return to civilian life.

“However, the job is not done. It is crucial that we do not forget that more remain in need of assistance UK wide and that is why we are so eager to make this project happen.

“Veterans, particularly those who are faced with great difficulties due to disabilities, are in need of suitable accommodation to meet their needs, and deserve the very best support to help them after their service.

With tailored support for each individual, RBLI’s village offers superlative care facilities, housing for families and accommodation for single veterans and their dependents. 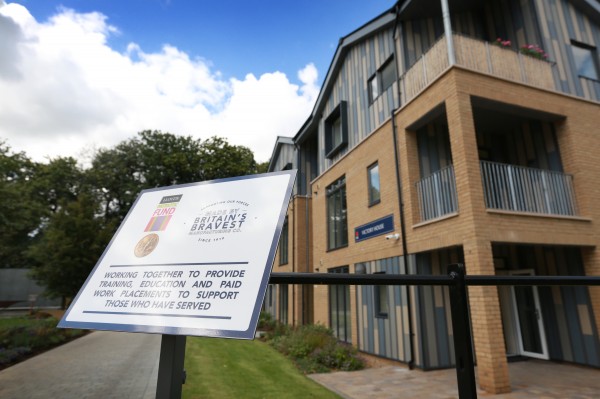 If you or someone you know can benefit from these services, contact RBLI’s property services team on 01622 795910, propertyservices@rbli.co.uk or visit www.rbli.co.uk

Alex Stringer, who sustained life-changing injuries after stepping on an IED during a tour of Afghanistan in 2013 at just aged 22, moved into Victory House after being referred to RBLI by fellow military charity Blesma following the breakdown of his marriage last year.

The triple amputee, who served in the Royal Logistic Corps, said the opportunity has provided him with a fresh start and he now has a new-found sense of independence.

The 26-year-old said: “I ended up moving out of the family home and into a place which wasn’t fully adapted for me.

“I then reached out for help and was pointed out to Royal British Legion Industries, who said they had an opportunity in Aylesford for me to move into a new property that is properly adapted and suitable for my needs.

“I came down to have a look and it was perfect for me. It enables me to get out and about with the kids, which made it a no brainer.

“One of the things that really appeals to me about this place is that the little things have been thought about: the hard floors in the hallways help wheelchairs, as do the lighter doors, wider frames and wet rooms. Most places are built to a certain height for people who walk around, but here everything has been considered.”

We would like to draw your attention to our donors who made this project possible.

Established in 1919, Royal British Legion Industries is an independent national charity aiming to provide employment, training and support to members and veterans of the British Armed Forces, their families and dependents; as well as those with a disability or health condition and those who have been long term unemployed.