Antis, a Bravehound Companion Dog, named after Antis DM a dog which flew with Czech airman Robert Bozdech during WW2 as part of the Czech Squadron of the RAF, was partnered with veteran Thomas Masters, at a ceremony at RAF Glasgow today, 22nd February. The ceremony was also attended by Bravehound’s new Patron, Author Damien Lewis, and the daughters of the late Robert Bozdech.

The original Antis DM was awarded the Dickin Medal for his service during the Second World War, the story of which was captured in a book, soon to be made into a film, by best-selling author Damien Lewis “War Dog – the dog who could fly”. Damien and the daughters of the late Robert Bozdech travelled to the home of RAF 602 reserves Squadron for the occasion.

Thomas Masters from Aberdeen was referred to the Bravehound project by Combat Stress. Bravehound, part of Glenart, provides companion dogs and training to veterans who may feel isolated, have mental health issues and often find adjusting to civilian life difficult. Veterans can benefit enormously from the 24 hour companionship which a Bravehound dog can provide giving the veteran the opportunity to attend training and social sessions, going out into the local community. 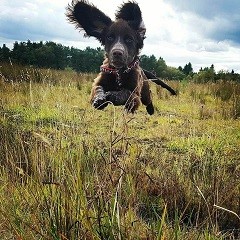 Antis has the very best start, having been trained by former members of the Royal Army Veterinary Corps Amber Sokyrka and Luke Pryce, and volunteer trainers Kate and Mart Bell.

Robert Bozdech’s daughter Magdalena Luscombe said “I’m sure Dad would have felt extremely touched and honoured that you named a beautiful and talented dog after Antis, especially as it is for such a fabulous and well-deserved cause.”

Fiona MacDonald CEO and founder of the charity Glen Art and Bravehound said “We’re are so proud of our little Antis, named  after the original Antis DM, a truly brave hound. The story of his bond with Czech airman Robert Bozdech was part of the inspiration behind setting up Bravehound, and we’re delighted that his daughters are coming to Glasgow to meet our Bravehound Antis and give their blessing for his important role as a companion dog for a veteran. Damien Lewis has been an amazing supporter and friend of Bravehound from the beginning, and we’re incredibly proud to announce that he has agreed to be a patron of Bravehound.” 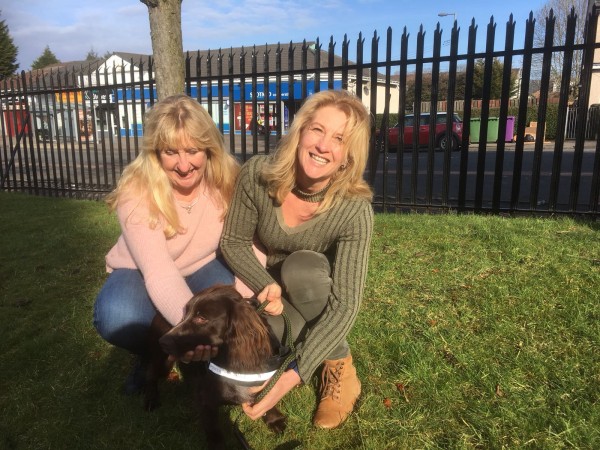 Damien Lewis said “’It’s fantastic to see a Bravehound assistance dog named after the original Antis, the German Shepherd who flew with RAF Bomber Command during WWII and became a war hero. The original Antis’s story, and that of his Czech airman and owner, Robert Bozdech, is told in my book, War Dog, which is presently being made into a movie by New York based Spot Films. As a patron of Bravehound, I’m sure the new Antis will play an equally vital role serving as an assistance dog for a wounded British veteran.’