Held at Chesford Grange, Warwick, the Scotty’s Ball celebrated everyone involved with the charity this year, from businesses to individual fundraisers. Guests enjoyed a three-course meal, live music and award ceremony, coupled with fundraising activity which included a silent auction and table games such as pass the parcel. 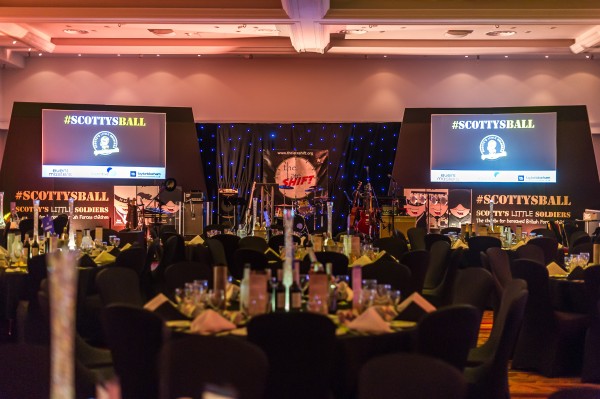 Speaking on this year’s event, Scotty’s founder Nikki Scott said: “On what is always an emotional night, it was once again amazing to see so many people that support the work, we do under one roof. This is our eight ball and they seem to get bigger and better each year. We managed to raise over £28,000, which is incredible, and I want to thank everyone who turned up, had fun and donated on the night.”

Nikki delivered a moving speech which ended with her discussing a particularly personal event, the finding of a black book in late husband Lee’s memory box. It was a book Lee had with him in Afghanistan and had used to make notes during briefings. On the very last page, the very last line Lee wrote read: ‘We will make life better.’

In 2018 these words have a double meaning, they not only confirmed what Lee and the Armed Forces set out to do in Afghanistan, but in addition to that, Lee is still making life better for hundreds of bereaved children through the charity set up in his memory.

Nikki’s words hit home with those in attendance and she was met with a standing ovation on conclusion of the speech. What followed on the evening was a celebration of the lives of those who had made the ultimate sacrifice.

Famed for his stunning magic shows, Britain’s Got Talent winner and Scotty’s Little Soldiers ambassador, Lance Corporal Richard Jones once again performed in front of the crowd, leaving some laughing and others speechless.

Richard said: “As an ambassador of the charity I want to do all that I can to make the night that little bit extra special. The audience was definitely up for it and enjoyed the show, taking part and making an incredible amount of noise!”

Scotty’s continues to reach more and more bereaved families across the UK every year. 2018 has seen the charity welcome 47 new members so far, something which CEO Stuart Robinson made a poignant reference to on the evening, expressing the need for constant funds in order to support current and newly added members.

To celebrate the key figures which raise funds throughout the year the charity handed out awards to the following:

Fundraiser of the Year – Kevin Godlington and Michael Kay

To find out more information or to get involved in raising money for Scotty’s you can visit www.scottyslittlesoldiers.co.uk/pages/14/get-involved.

Scotty’s Little Soldiers, founded in 2010, honours Corporal Lee Scott’s memory – both as a loyal soldier and a loving father – and provides a practical yet personal way for the public at large to show their appreciation for those brave individuals who make the ultimate sacrifice in the service of their country. Currently Scotty’s Little Soldiers supports 368 bereaved children and runs a variety of programmes to help children smile again and look forward to a brighter future. You can visit the charity online at www.scottyslittlesoldiers.co.uk.