You are here: Home / News / News / 80 years on, Radar Tribute highlight that it was more that the flying few who won the Battle of Britain

80 years on, Radar Tribute highlight that it was more that the flying few who won the Battle of Britain

80 YEARS ON, RADAR TRIBUTE HIGHLIGHTS THAT IT WAS MORE THAN THE FLYING FEW WHO WON THE BATTLE OF BRITAIN

Last surviving member of The Few pays tribute: “There is no doubt in my mind we should applaud all those who fought during those difficult months, not just the pilots. The RAF was the most sophisticated air force in the world at that time and we would not have prevailed unless everyone were true professionals and played their part.” John ‘Paddy’ Hemingway, 85 Squadron 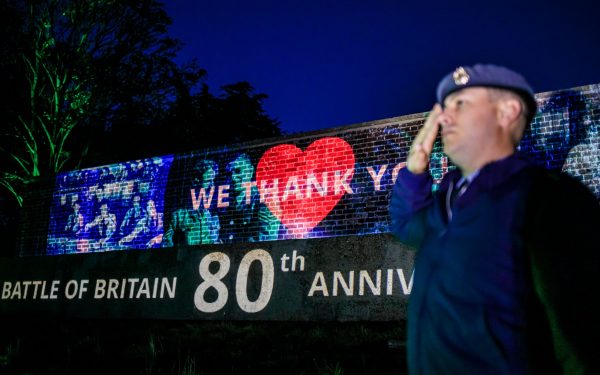 To mark the 80th anniversary of the Battle of Britain, the RAF Benevolent Fund, the UK’s leading RAF welfare charity, has led a national tribute to all those who played a key role in the battle with a poignant light show at a former Battle of Britain radar site.

A special tribute was deemed important on the 80th anniversary of the battle by the Fund, which has been supporting members of the RAF Family for more than 100 years. The charity hopes the tribute will encourage the nation to stop and consider the contribution of those whose stories are not often centre stage when we reflect on the Battle of Britain, for example those who worked on the ground to support the famous ‘Few’ fighter pilots.

“We often talk of ‘The Few’, the fighter pilots who took to the skies during the Battle of Britain. Their contribution was exceptional and it is important we remember them and their experiences. What we don’t reflect on enough, within the Battle of Britain story, are the lives and experiences of those who were involved on the ground during the battle. Particularly, the women who were behind the scenes, as radar operatives, filter room attendants serving in the Women’s Auxiliary Air Force or members of the Royal Observer Corps.”

The light show, which took place at Bawdsey transmitter block in Suffolk, the first fully operational aircraft radar station in the world, pays homage to one group in particular, women of the Women’s Auxiliary Air Force who worked on radar during the Second World War.

It was radar stations such as Bawdsey which provided invaluable intelligence during the Second World War and during the Battle of Britain when the Luftwaffe boasted nearly twice as many aircraft as the RAF. The video animation projected on to the current site features the images of the giant Chain Home radar towers that stood 360ft tall and ran all along the East Coast of the UK, and the female radar operatives and filter room assistants who played such a crucial role in receiving and reporting the information back to Fighter Command.

Women like Kath McLeod, 97, who worked at several radar sites during the Second World War including RAF Trelanvean in Cornwall and RAF Ringstead in Weymouth. Kath believes she was chosen for a radar role due her natural ability in science subjects at school. She met her husband Ian who also worked on radar in Cornwall and her contribution has encouraged her daughter Ann, 69, and her grandson James, 42, to follow in her footsteps as they too have served and are serving with the RAF.

The last surviving member of ‘The Few’, Battle of Britain pilot John ‘Paddy’ Hemingway, said of the contribution of radar:

“In reality, the system worked so well that the time from a blip on the radar to a squadron in the air to meet it was six minutes, and the climb rates of the Hurricanes and Spitfires put the fighters at 15,000 feet within six minutes of leaving the ground. Time was a crucial factor in the battle. The ability to get to fighting altitude – 10,000 to 15,000 feet, usually – proved critical, and the aid of radar early warning would prove to be one of the vital British advantages in the battle.

“In effect, it took between 10 and 15 minutes after first spotting the Germans to put together a proper intercept at the point of attack.”

“I’m very happy to represent my comrades as the RAF Benevolent Fund celebrates the 80th anniversary in this imaginative way. There is no doubt in my mind we should applaud all those who fought during those difficult months, not just the pilots. The RAF was the most sophisticated air force in the world at that time and we would not have prevailed unless everyone were true professionals and played their part.”

In Scotland, the radome at Remote Radar Head Buchan, on the Aberdeenshire coast, joined the tribute to symbolise the scope of radar during the Second World War which spanned Britain’s coastline from the Shetland Islands down to Cornwall.

Like the ground crews and radar operators who were the unsung heroes of the Battle of Britain, many RAF veterans and their partners remain unaware of the support they are eligible for, from the RAF Benevolent Fund. Last year the charity launched a major campaign to encourage RAF veterans and their partners or widows(ers), including members of the Royal Observer Corps, in need to get in touch with the charity.

“We believe there are hundreds of thousands of veterans out there who need support but are either unaware of the help available or are too proud to ask. That is why we’re calling on the public to help us find them before it’s too late. They may be your friends or relatives. If you know of someone who might need some support, get in touch today.”

If you know any RAF veterans and their partners in need, refer them to the Fund by visiting rafbf.org or by calling 0300 102 1919.