To mark the 80th anniversary of the RAF Air Cadets, the youth organisation has teamed up with the RAF Benevolent Fund to launch a campaign to raise £80,000. In tribute to their milestone moment, participants have 80 days to complete 80 miles and raise money for both causes. 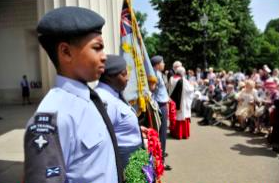 The challenge begins on 1 June and runs until 19 August with funds raised split between the Fund and the RAF Air Cadets General Purpose Fund, a bursary scheme which funds development of cadets and adult volunteers.

The air cadets and the RAF Benevolent Fund have a long history of working together. As a charity which supports the RAF Family, the Fund has always been able to rely on support from the cadets in this mission with everything from fundraising efforts to supporting veterans and serving personnel at Fund events.

Mike Straney, Director of Fundraising and Communications at the RAF Benevolent Fund, said:

“When the Fund ask, the cadets are there. They make a real difference at our fund-raising events, cheering on our supporters and often taking part themselves. With a quarter of cadets going on to become regular RAF personnel, the link between the Fund and cadets is clear.

“Working together with the cadets to mark this significant date, reflects the partnership which has endured throughout.”

To coincide with the anniversary, the Fund has announced an enhanced package of support to the RAF Air Cadets, including members of the Air Training Corps and Combined Cadet Force (RAF). These members of the RAF Family can access welfare services which support emotional wellbeing, counselling and bereavement. Financial support is also given if a member is killed, on or off duty. This also extends to staff cadets and uniformed volunteers.

“I am absolutely delighted to announce that we are linking with the RAF Benevolent Fund in this amazing fund-raising venture during our 80th anniversary.

“I for one will be running and cycling 80 miles as part of the challenge and I hope you will all join me as we raise money to help cadets, volunteers and the RAF Benevolent Fund. Let’s reach for the stars in our endeavours!”

Set up in 1941, the Combined Cadet Force and Air Training Corps are collectively known as the RAF Air Cadets. The groups provide youngsters aged 13 and above with opportunities for adventure, training and skills including learning to fly a glider.

The Fund is also collecting memories of those who were cadets to form a commemorative book, with testimonies collected online.

To find out more about the Fund’s support for air cadets or to take part in the 80 miles in 80 days challenge, visit rafbf.org/aircadets