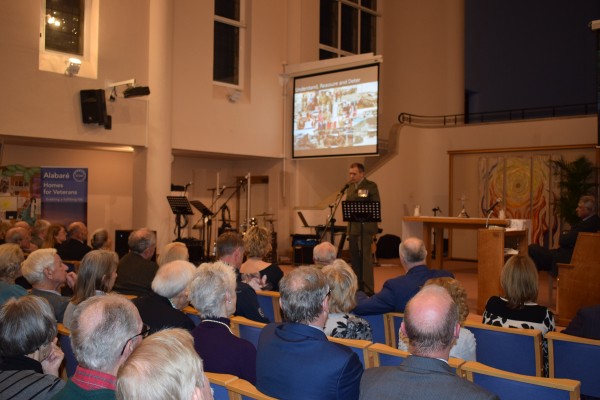 ‘Disaster in the Caribbean’ a fundraising event held by Wiltshire-based charity Alabaré’s ambassadors helped to raise over £3,000 for their Wiltshire Homes for Veterans service.

The evening at St. Francis’ Church Salisbury, saw a captivating talk by Lt Col Paul Maynard MA BSc RM of 40 commando Royal Marines, who led the humanitarian relief mission across the Caribbean in the wake of hurricanes Maria, Jose and Irma.

Lt Col Maynard’s speech detailed how he assumed command of 40 Commando Royal Marines in March 2017. In September 2017, at just 12 hours’ notice, 40 Commando and Royal Engineers from 24 Commando Regiment were deployed to prepare and repair the British Virgin Islands from the effects of Hurricane Maria.

“We are delighted with how the evening turned out.  As a result of the costs being kept low through excellent support and donations over £3,000 had been raised.

The presentation by Lt Col Paul Maynard MBE was very well received and the role played by the Royal Marines in the West Indies last year received huge praise. In addition, the fantastic work carried out by Alabaré was most favourably commented on.”

The funds raised will all go towards Alabaré’s Wiltshire Homes for Veterans. The charity are the biggest provider of temporary accommodation and support for veterans in Wiltshire who are homeless or in danger of becoming so.

As well as providing dedicated services to ex-British service personnel in Wiltshire, Alabaré’s Homes for Veterans service extends right across the South West as well as in to Wales and can provide support for over 120 veterans on any given night.