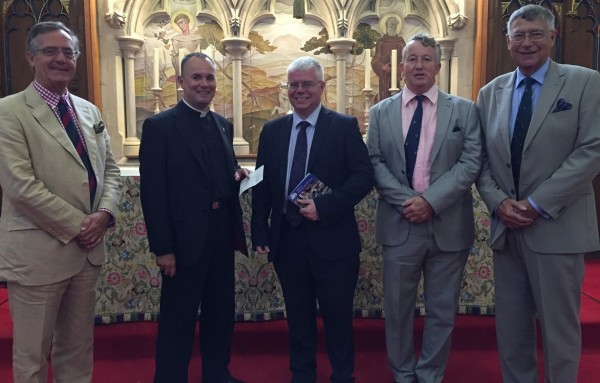 Andrew Lord CEO received a cheque for £1,500 from Rev Mike Wagstaff RN in a packed King’s  Chapel, Gibraltar. In the presence of  His Excellency, the Governor of Gibraltar, Lt Gen Edward Davis CB, CBE, KStJ and Commander British Forces Commodore Michael Walliker OBE RN.  In addition to the regular congregation, as the service coincided with the WRNS 100th Anniversary event in Gibraltar, there were many retired WRNS in King’s Chapel together with servicewomen currently in Gibraltar.

In presenting the cheque to our Homes for Veterans, Rev Wagstaff said;

“Here at King’s Chapel we work to serve not just the defence community here on the Rock, but the whole community wherever it might be and including anyone who at any time has served their country in the Armed Forces.  And those marginalised members of that community – those who need housing or other support – deserve our special support. It is with great pleasure and pride in what they do that we have been able to help Alabaré in a small way.”

In reply, Andrew Lord outlined the work that Alabaré did in support for Veterans and recounted the experiences of one who was most grateful for the care and backing he had received. Andrew thanked the King’s Chapel’s congregation most warmly for their support and said the charity would use the donation to good effect.

Alabaré Christian Care and Support provide the highest standards of accommodation and support to disadvantaged and vulnerable people in our communities in order that they can have a home, health, choice and independence. Since 1991, Alabaré have been working with people facing disadvantage through homelessness, mental ill-health, learning disability or a combination of these.  We provide housing and personalised support based on the individual needs and aspirations of each person, tackling underlying causes and giving them the skills and confidence to move forward with their lives. www.alabare.co.uk