You are here: Home / News / News / All Sessun running to raise money for SSAFA

All Sessun running to raise money for SSAFA

A Royal Army Medical Corps Captain, who is currently stationed in York, has been running 3-miles a day since May 2020 to raise money for SSAFA and has no plans to stop until his 30th birthday in November 2022. 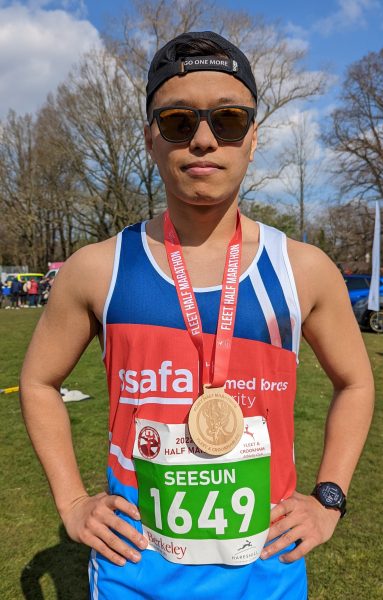 Captain Seesun Gurung, 29, originally from Aldershot, began his challenge in May 2020 and has endeavoured to run a minimum of 5km every day, until his 30th birthday on the 12 November, which will be a total of 925 days.

Having recently completed the Fleet Half Marathon in March, Seesun aims to keep running until the very end, taking on his challenge in all weathers and locations.

Seesun was inspired to take on his challenge after witnessing the amazing work that SSAFA does for the Armed Forces community, including their Digital Inclusion initiative amongst the Gurkha community.

“I saw the work that SSAFA was doing to help the Nepalese community during the lockdown; seeing that SSAFA had donated electronic equipment to the more vulnerable, isolated and older members of the Gurkha community struck a chord with me and I immediately knew that SSAFA would be the charity that I would do the charity fundraiser for”.