You are here: Home / News / News / “Ancient Mariners” prepare to break world record as oldest team to row the Atlantic

Four pensioners are getting ready to row the Atlantic Ocean in a bid to break a world record.

The four men, aged between 61 and 67, are completing final preparations to set off tomorrow (12 December) on the ultimate test of physical and mental endurance. The group will be attempting to set a new world record as the oldest team of four ever to row across the Atlantic. 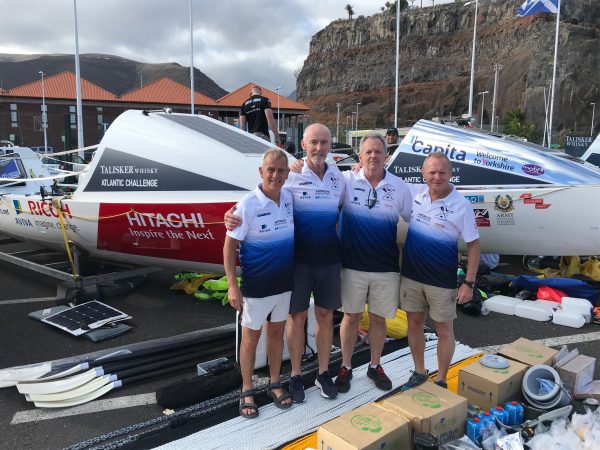 With a combined age of 257 years, The Ancient Mariners crew will attempt to complete the 3,000 nautical mile crossing to Antigua.

They will be one of 30 teams taking part in the Talisker Whisky Atlantic Challenge and will be setting off for the challenge in their ocean rowing boat The Grey Escape.

The group is made up of Guy Munnoch, 67 and from Hampshire, Mike Winn, 64 and from Somerset, Steve Hughes, 61 and from Scotland and John Moorhouse, 63 from Manchester.

Guy, who is the chairman of Hitachi Capital (UK) PLC which has sponsored the challenge, said:

“Two months is a long time to be at sea and be exposed to the elements.

It’s the unknown that’s daunting but we have prepared as much as possible.”

They have trained for roughly 150 hours each but said they are all very conscious to keep injury at bay.

Working on a two hours on, two hours off shift pattern, the group expect to take around 1.5 million oar strokes during the race and each rower is predicted to lose an average of 12kg crossing the Atlantic.

With no toilet on board their specially adapted boat and food and water in short supply, the challenge is certainly not one for the faint hearted.

“We are all individually very competitive but really we want to complete, not compete. We’re not aiming to break the record for time but for age,” John said.

The Ancient Mariners will face sleep deprivation, physical and mental extremes and sea sores while not only trying to break a world record but also raise money for two charities close to their hearts; Blind Veterans UK and Open Arms Malawi.

“There are two of us in our crew who are ex-military and we wanted a charity that was both multi-generational and tri-service.

“Blind Veterans UK give those who have served our country much needed support that ranges from rehabilitation and training to practical advice and vital emotional support.”

Mike added: “Myself and John have collectively spent more than 40 years in Malawi and understand the problems that drought and AIDS have brought on the Malawian people.”

If the team does complete the challenge, their combined ages would break the previous record by 33 years.

To donate money to their Just Giving pages, go to ancientmariners.net

Open Arms Malawi believes that every child has a right to survival and development.  Their principal aim is to provide care to Malawi’s vulnerable children, supporting them within families and communities so that they can thrive.