The Not Forgotten
celebration, Veterans

In celebration of Her Majesty The Queen’s Platinum Jubilee, The Not Forgotten, a British Armed Forces charity for wounded, sick and injured serving and ex-military personnel launched their ‘Anyone For Tea’ Tour in Surrey on 13 June 2022. 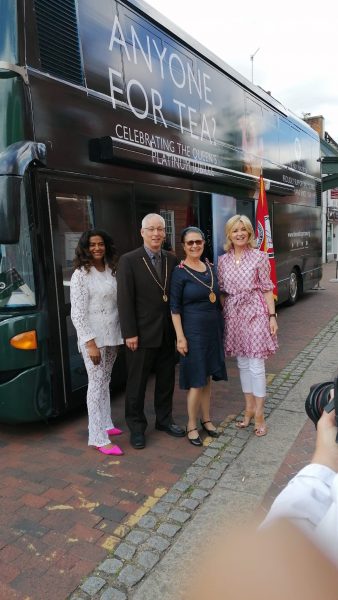 Part of a 10-day road trip, the Tour aims to raise awareness of the charity’s work and brought entertainment, cheer and chat to UK veterans, serving personnel and their friends and families in Surrey. It was all served up with a slice of cake  and a biscuit or two and washed down with a great British cuppa – from a specially liveried double decker bus that local residents couldn’t miss.

Much loved TV personality, Anthea Turner, was on hand to lend her support along with Councillor Shirley Faraday, Town Major of Godalming and her consort, Dr David Faraday.

Shabnam Russo, who was declared as one of the top five puddings in Her Majesty The Queen’s Platinum Jubilee, a Pudding Competition was also in attendance and baked some fabulous cakes for the guests to enjoy.

Forces Sweetheart, Annie Riley entertained the troops and Waitrose customers, singing a varied set including popular classic hits from across Her Majesty The Queen’s reigning years.

The tour, which is sponsored by 11 Waitrose stores, will see the Anyone For Tea bus pull up at other easily accessible Waitrose car parks at locations from Cornwall to Glasgow.

The Not Forgotten was founded 102 years ago to provide entertainment and recreation, including social activities and challenge holidays, for wounded, sick and injured service personnel and veterans and to improve physical and mental health, address isolation and loneliness, and promote a sense of community and balance.

The charity met up with some familiar faces including some of whom are already beneficiaries of the charity and made new friends, while raising awareness of their work.

The Not Forgotten already supports over 10,000 beneficiaries and hope to encourage more veterans to come forward so they can benefit from their varied programme of events.

Rosie Thompson MBE, Head of Events, The Not Forgotten said:

“We were thrilled to launch the Anyone For Tea Tour Bus and couldn’t have done this without the sponsorship and assistance of Waitrose.

“We’re delighted to have Waitrose onboard and it was fantastic to welcome so many veterans of all ages as well as their friends and families to share in the celebrations.”

“We are delighted to sponsor this important event which celebrates The Platinum Jubilee and the UK’s veterans who make up such a valuable part of our community. Our Partners are all looking forwarding to welcoming customers and those within our regional communities to what is bound to be a fantastic and fun-filled Tour.”