You are here: Home / News / News / Army blind veteran to receive well-deserved break this Christmas thanks to national military charity 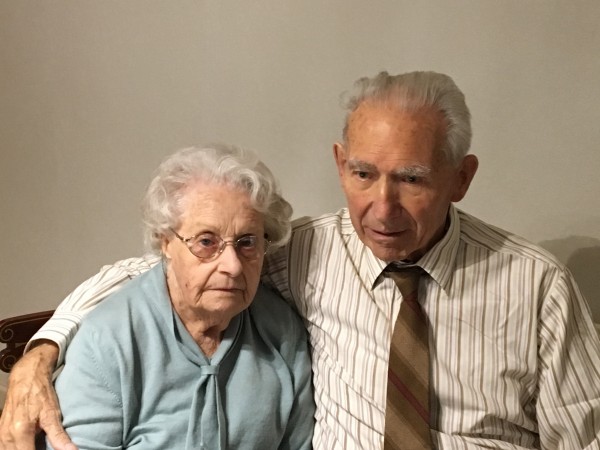 Bill Hewson, 91 and from Kingston upon Thames, will spend the festive period with other vision-impaired ex-Service men and women at Blind Veterans UK’s Brighton centre for the third time. Every year the charity invites beneficiaries who are in need of respite, like Bill, to spend the week at one of the charity’s training and rehabilitation centres.

Bill says: “I’ll be spending Christmas at the centre with my wife Rita. We’ve been married for 65 years and I love her very much but now that she has dementia I’m both her husband and her carer. It can be very tiring and I know that having a week at the Blind Veterans UK centre in Brighton will be a chance for both of us to relax.”

He continues: “If we weren’t at the centre this year we’d be on our own and Christmas day would be like any other day, with me looking after Rita and preparing our evening meal. I’m really happy that this year we have something so special to look forward to.”

Called up in 1944, Bill joined the Royal Armoured Corps. He was stationed at Bovington training camp and progressed to the rank of Corporal by the end of his Service.

Bill says: “I sustained an injury to my hand when I was still in training and so instead of being stationed abroad I was put in charge of running the barracks at Bovington. It was hard work but I knew it was important to keep everything running smoothly.”

It was years later, when Bill was in his eighties, that he was diagnosed with age-related macular degeneration and told that he would become blind. He had to give up driving, could no longer read and had to adapt to his sight loss alongside looking after Rita.

Bill says: “It can be a bit of a struggle sometimes because my wife’s condition means that she often forgets where things are. With me being blind it can be a struggle finding them again!”

Fortunately in 2013, Bill started to receive support from Blind Veterans UK, a few months after been referred by his optician. Since then Bill has received equipment like a talking watch and a non-slip dinner mat to help him maintain his independence. He has also visited the charity’s rehabilitation centre in Brighton for training and respite and enjoyed the camaraderie of meeting other blind veterans.

Bill says: “I know that I’ll be well looked after when I’m at the centre for Christmas and the same goes for Rita. It’s been so wonderful joining Blind Veterans UK because you’re really treated like family.”

The charity is reaching out to the estimated more than 59,000 vision-impaired ex-Service men and women in the UK battling severe sight loss who could be eligible for support but don’t currently realise it. Most of these veterans completed their service many years ago, and have since lost their sight due to conditions such as macular degeneration or glaucoma.