You are here: Home / News / News / Army V Navy Match Ball Will Go To Gallipoli Ahead of the Big Game 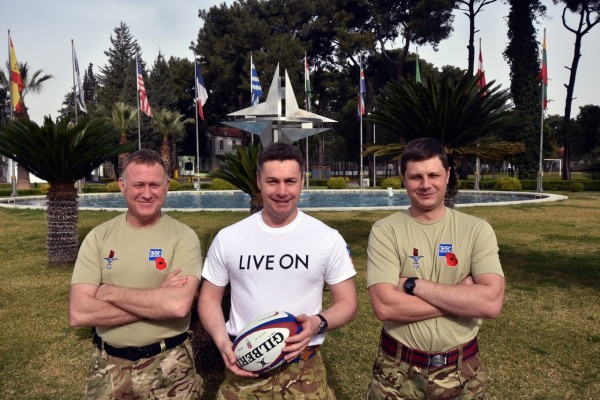 A team of UK Armed Forces Personnel are walking 30km as part of a commemorative tour around the battlefield sites of Gallipoli accompanied by the match ball that will be used in this year’s Army Navy Rugby Match.

Led by the Royal Navy’s Lt Cdr Doc Cox, the team includes British Army colleagues WO2 Adam Finch, Capt Hugo Engelbrecht and Sgt Sid Ney and they will be supported on the day by Capt Roly Jackson.  The team will set off at sunrise on Sunday 22nd April from V Beach taking in poignant sites across the region where 58,000 allied soldiers – including 29,000 British and Irish soldiers and 11,000 Australians and New Zealanders – lost their lives.

Currently working for Nato, and all with recent operational experience, the team are raising money for The Royal British Legion – also Charity of the Day at this year’s Army v Navy sporting clash at Twickenham.

Former C-IED expert Hugo Engel Brecht  said; “We all know personally fellow servicemen that have been injured on operations and thank The Royal British Legion for their continued support to those and others like them.  The walk is aimed at ‘remembering the past whilst supporting the future’.

Former Director of UK Armed Forces Rugby, now Rugby Ambassador, Doc says ” I have had the pleasure of being associated with the Legion through Combined Service and UKAF rugby for the past five years. The charity has sponsored us and also had a huge presence at various matches. They support the Armed Forces Community at every stage of their lives. Remembrance for me is not about one day of the year its everyday”

Doc became familiar with the Legion’s work whilst he was Head Coach for the Royal Navy Under 23’s squad and met Royal Marine Aaron Moon. Aaron had a promising rugby career ahead of him when, on his first tour of Afghanistan, he was severely injured and was left with life-changing injuries.

Doc says; “Thanks to the Legion who provided support in those dark, early days of his recovery, Aaron has proven what an amazing, courageous person he is and is now looking to become the first amputee professional golfer in the UK.”

On Match Day on Saturday 5th May, Doc will be handing over the match ball at the Rose and Poppy Gate at the Twickenham stadium. The gates were unveiled two years ago as part of the RFU’s World War 1 commemorations, honouring players killed in action from 1914 onwards. Seven of the 1914 England Grand Slam-winning team and 1000’s of rugby players at every level of the game left rugby fields for the battlefield, never to return.

The Legion will be hosting various activities at the Army V Navy game both on and off the pitch under its theme ‘One Legion – United by Difference’. The theme will explore the differences between the British Army and the Royal Navy that ultimately make them so strong when they stand together.

In this, the Armistice Year, the Legion is leading the nation in coming together to say ‘Thank You’ to the First World War generation. In front of 82,000 rugby fans The Royal British Legion will demonstrate that while we all have our own strengths, it is playing to these strengths that unites us. Never was this truer than a century ago when soldier, sailor, marine and airman fought together for peace.

The team of personnel are hoping to raise £2,000 and there’s a dedicated Just Giving Page where you can help support them. https://uk.virginmoneygiving.com/Team/GallipoliGallop20172018