Renowned artist Rosa Branson MBE, has spent a lifetime creating breathtakingly beautiful pictures including a picture for the Taxi Charity 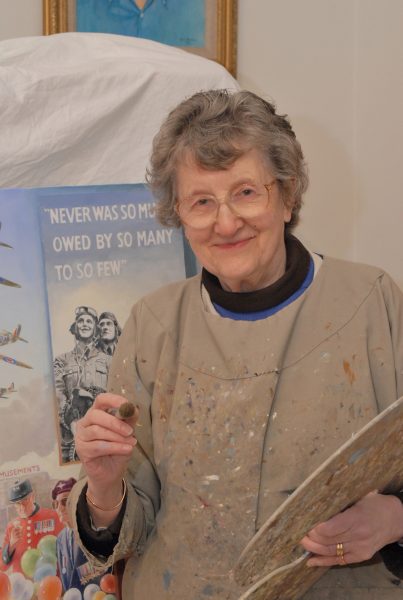 Rosa Branson MBE was born in 1933, and for over 60 years has been painting and designing fabrics. She specialises in the Old Masters oil painting technique of layering subtle glazes of translucent paint over each other. Her paintings include portraiture, still life, landscape, and large-scale charity paintings for charitable organisations including Oxfam, the Red Cross, the Salvation Army, and the Taxi Charity for Military Veterans. 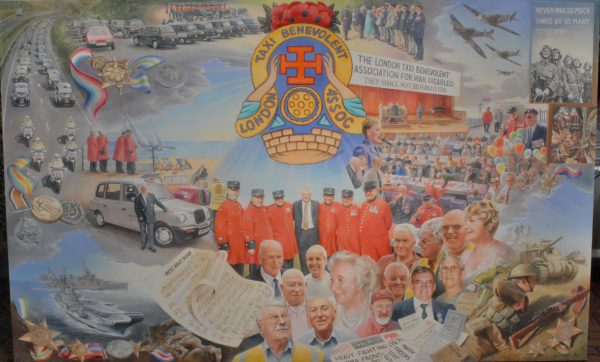 Rosa began work on a huge painting depicting the work of the Taxi Charity in 2008. The finished picture includes vignettes of all aspects of charity life; taxis going to events in procession, veterans at Taxi Charity events, scenes from the war, the Taxi Patron Dame Vera Lynn, the lyrics sheet for her most famous song, We’ll Meet Again, and the members of the cab trade and the committee who run the charity. The finished work which was completed when the charity was still called the London Taxi Benevolent Association for the War Disabled, hangs outside the Mayors Parlour, on the first floor of Worthing Town Hall, the seaside town that the Taxi Charity has been visiting every year since 1948.

The Worshipful the Mayor of Worthing, Councillor Lionel Harman, said

“The Taxi Charity picture is one of two paintings by Rosa Branson we have in the Town Hall here in Worthing and we consider ourselves to be fortunate to have them. The other celebrates 100 years of Women in Politics and they both generate a great deal of interest from visitors to the Town Hall. The Taxi Charity Painting is a favourite of mine, and I know from reading letters from Rosa to the council, it was special to her, as her Father was killed in Burma, so this was in some way her own personal tribute to him.  The painting is on show outside the Mayor’s office and is the starting point for Mayoral tours of the Town Hall. As I am also the Armed Forces Champion for the council it is great to have this painting in a prime position. The Borough is honoured to welcome the veterans to the Town every year and applaud the Taxi Divers who give up their time to give them a great day out and the charity that does great work supporting them.”

“My wife and I visited Rosa at her home in Highgate several times. She is a fantastic raconteur and we thoroughly enjoyed spending time getting to know her. It was an honour that Rosa painted such a magnificent piece representing the work of the Taxi Charity which really captures the spirit of the charity and the friendship between cabbies and veterans.”

A discounted copy is available for pre order directly from the publishers by visiting www.linen-press.com/shop/rosa-branson-a-portrait