You are here: Home / News / News / Award-winning chefs’ fundraiser is icing on the cake for RAF charity 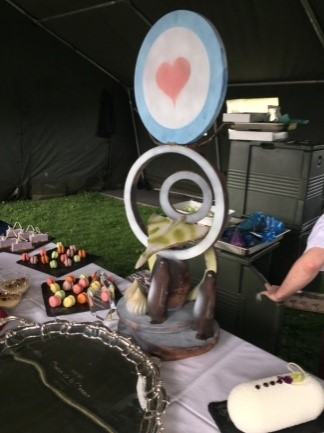 Three chefs who were crowned the Crème de la Crème by the BBC earlier this year have helped to raise a sweet total for the RAF Benevolent Fund, the RAF’s leading welfare charity.

Liam said: “It’s really important for us to support the RAF Benevolent Fund, because they’re making a better life for all of us. We wanted to fundraise so they can continue in that work, helping the whole RAF Family. 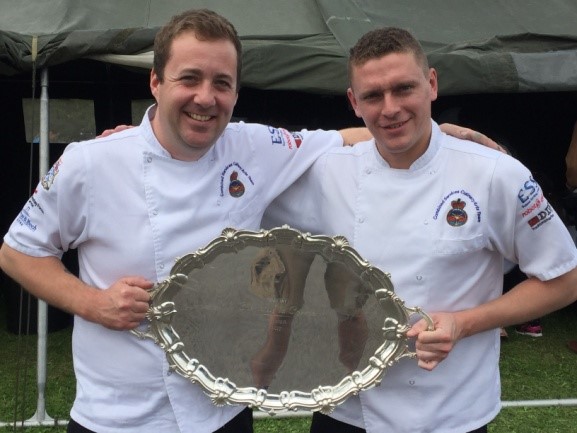 “I see the difference they make here day-to-day on station and I know they are investing their time, money and effort in us. For example they’ve helped to fund new gym facilities on station, something I’ll use a lot.”

Liam and his team, Cpl Chris Morrell and Cpl Nick Fryer, produced the mouth-watering display in their own time, working a full day and then spending up to five hours in the kitchen for the charity. The chocolate centrepiece in particular was the culmination of seven days’ work, containing 15 kilograms of dark chocolate! The finished masterpiece had to be assembled on site, on the edge of the airfield due to its delicate nature – a far cry from Welbeck Abbey the setting for the Great British Bake Off’s Crème de la Crème series.

The colourful display of delicious desserts attracted quick sales, with one sharer dessert being sold for £40 (four times its original price) when an impromptu bidding war began. The chefs were even asked to bake one visitor’s wedding cake next year!

Paul Hewson, Regional Director at the RAF Benevolent Fund, said: “I’m not surprised Liam’s cakes sold out – they were spectacular! It is incredible supporters like Liam, Chris and Nick who help to ensure the vital work the Fund does, supporting retired and serving personnel, is able to continue.”

And Liam, Chris and Nick are certainly not resting on their laurels, they are currently practising for two international competitions next year; the Culinary World Cup in Luxembourg and Hotel Olympia in London where they aim to defend their title won two years ago.