A familiar face to many within the third sector and fundraising circles in Scotland, Scott Cunningham, has become Community and Challenge Events Officer for SSAFA, the Armed Forces charity. 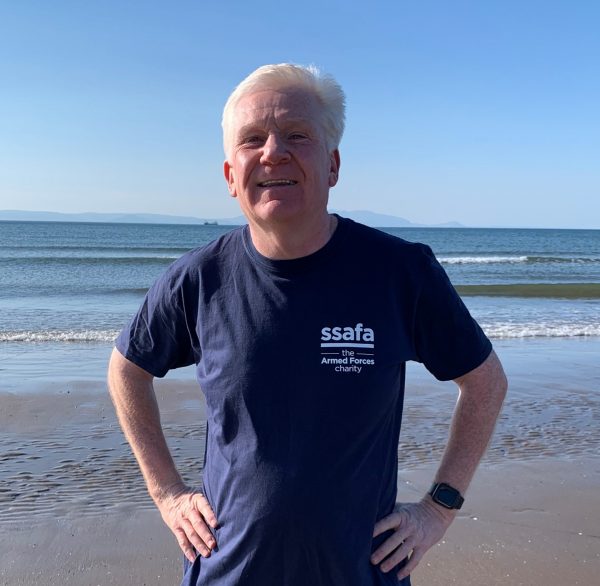 A resident of Larkhall, South Lanarkshire, Scott worked several jobs before gaining an HND in Business Administration and Management, before a career in the Civil Service – and all this was after he lost his sight aged 23.

Scott began training with and was later partnered with his guide dog in 1995, a moment he describes as “life-changing”.

“From this point, I took back complete control of my life, I became and have remained an active member of my community, achieving some things that no-one else had, including being the first blind person to complete several long-distance walks [West Highland Way four times; Speyside Way; Southern Upland Way; and Pennine Way] and then the first to hike up Ben Nevis.”

An avid skier and runner – he ran 12 marathons last year and his first of 2022 is the Manchester Marathon on April 3 – Scott’s new-found, or perhaps re-found, life was not just about him embarking on personal challenges.

He created fundraising initiatives and led volunteer fundraising for Guide Dogs, which saw him named as UK Volunteer Fundraiser of the Year 2010 by the Institute of Fundraising. On top of this, he was made a Member of the British Empire in 2011 for his work with Guide Dogs and RMA The Royal Marines Charity. He shared this honour with Travis, his then guide dog, who was given an honorary Green Beret.

As for many people, the pandemic affected his career, and he was made redundant from his role at a local charity part way through the lockdowns.

But Scott is back, and as he said:

“The military has given so much to our country and it’s my turn to return the service and now in post with SSAFA, I can really give something back while helping others to.

“I’m looking forward to playing my part in the Scottish team here at SSAFA to make it a more widely known charity, expanding the support base, and helping to raise much needed funds as the calls for SSAFA’s support grows day by day.”

There are many fundraising activities for SSAFA open to people across Scotland, including the series of Kiltwalks, beginning with the Glasgow Kiltwalk on April 24.

If Scott’s story has inspired you to fundraise for SSAFA so that it can continue to provide support to serving and retired personnel, and their families, then click here to get in touch.