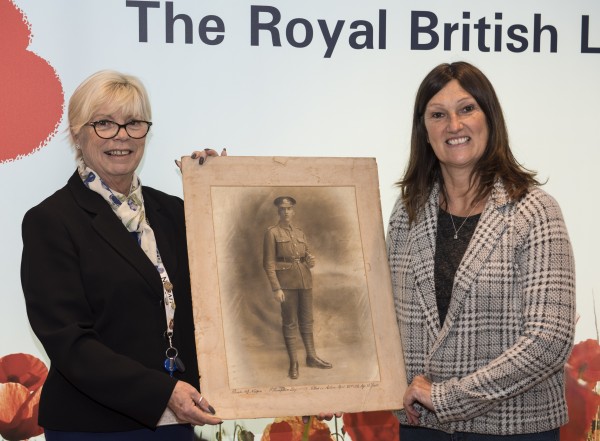 An original photograph of World War One soldier, Private Arthur John Nappin, is to be reunited with his family after an appeal from The Royal British Legion’s South East Midlands Team.

Based in Aylesbury, the team put a call out to the community to find Private Nappin’s lost family after his original war-time photograph was handed in to the high street Pop In Centre. Thanks to a widespread appeal, which appeared on social media, Carole Hickman, came forward after being informed by her cousin and extended family that Arthur Nappin may be a relation.

Carole said: “I was surprised to see on social media and in the paper that the Legion were actively seeking to reunite a war time photo with the subject’s family. My cousin and I delved a little deeper into our family history and we traced an Arthur Nappin back to our Grandfather, Henry William Nappin, who was from Oakley village in Aylesbury.

“After verifying the dates of service and family tree it seemed that this young soldier in the photo was actual a relative of the family. We are delighted that we will be able to re-home this wonderful photograph of Arthur and show the family what a brave young man he was.”

Killed in action in April 1918 in Flanders, Arthur Nappin was born in Aylesbury on 7th January 1899 and was a son to Robert and Elizabeth Nappin who resided in Castle Street in the town. Arthur’s brother, Sergeant William Nappin, was killed in action in October 1916.

Announced in the newspaper on 11th May 1918, Arthur, who was part of the 1st Hampshire’s was ordered ‘over the top’ and was hit as they reached their first objective. However, it also reported the attack launched by the battalion had been a success overall.

Lee Lawson, Membership Support Officer at the Legion, said: “2018 will mark a century since the end of the First World War and we want to remember those locally who gave their lives. Therefore, we are so happy to reunite this striking photo with Arthur Nappin’s family. The team here in Aylesbury have been appealing far and wide for the family to come forward and we are excited to meet this soldier’s relatives and pass a piece of their history back to them.”