You are here: Home / News / News / Bake Off star gives blind veterans a reason to be cheerful on ‘Blue Monday’ at charity event 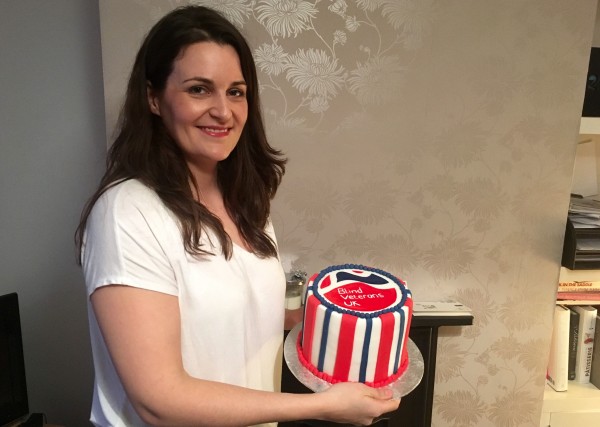 Sophie Faldo, winner of The Great British Bake Off 2017, surprised blind veterans with a cake and video message at a tea party hosted by a national military charity on ‘Blue Monday’ (15 January). The social event was organised by Blind Veterans UK at its London office to give its beneficiaries a smile on a day hailed as ‘the most depressing of the year’.

Sophie, a former Officer in the Royal Artillery and now a Reservist, baked a fondant cake for the event and recorded a video message for blind veterans in which she spoke of her own time in the Army.

Sophie says: “It was a pleasure to bake a cake for blind veterans to enjoy together on ‘Blue Monday’. Serving in the Army myself, I know how important it is to have the support of your peers and that feeling of camaraderie that comes from being together in the Armed Forces.”

She continues: “It’s fantastic to see the impact of social events such as this one. Blind Veterans UK offers a lifeline to vision-impaired veterans and today is all about helping them enjoy good company, and, of course, delicious cake!” 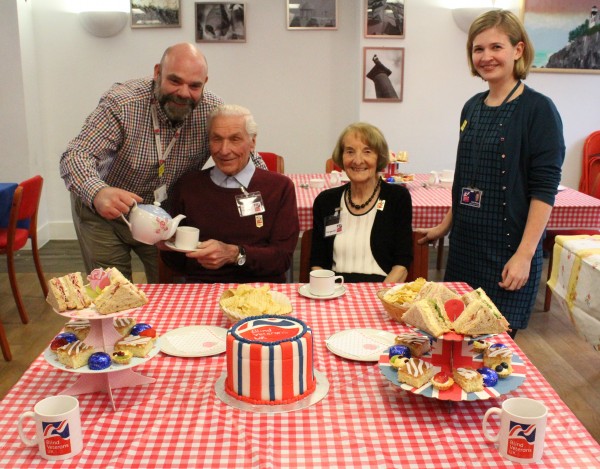 The tea party forms part of a programme of social events organised by Blind Veterans UK for its beneficiaries, such as lunch clubs and reunions, which offer veterans a chance to get together with their fellow comrades.

Blind Veterans UK has conducted research into veterans’ social isolation which highlights the importance of these social events. The survey conducted by the charity found that 61 per cent of older veterans said that they had become increasingly isolated following their diagnosis of sight loss. After receiving the charity’s support, 86 per cent of respondents said that it had helped them to feel less isolated.[1]

Matthew Athey, Community Team Leader at Blind Veterans UK says: “Our veterans often tell us that losing their sight made them feel more isolated. Events like these are a valuable opportunity for ex-Service men and women to get out and about, make new friends, and share in that special Forces spirit again. We’re so pleased that Sophie could lend a hand in bringing some cheer to the event this ‘Blue Monday!”

Ickenham blind veteran Alan Lance, 82, attended the tea party with his wife Lorraine. Alan was called up for National Service in 1953 and joined the Army Catering Corps. He was stationed in Egypt’s Suez Canal Zone and demobbed in 1955. Alan lost his sight later in life due to age-related macular degeneration and joined Blind Veterans UK in 2014.

Alan says: “I didn’t initially realise that I was eligible for the support of Blind Veterans UK, but my wife read an article about the charity and told me to get in touch. I’m glad I did because the support for both of us has been wonderful!”

He continues: “We had a lovely afternoon at the tea party and enjoyed good company, delicious cake, and even some fizz! I used to be shy about going to social events, but Blind Veterans UK certainly put a smile on both our faces on ‘Blue Monday’.”

Blind Veterans UK estimates that there are 59,000 ex-Service men and women battling severe sight loss who could be eligible our support but who do not realise it. It doesn’t matter when or how a veteran lost their sight, or when they served, Blind Veterans UK can help.

All figures, unless otherwise stated, are from Clarient Research.  The sample size was 516 responses from a postal survey to 1,506 Blind Veterans UK beneficiaries aged 75 or older who joined the charity in the last three years.  Fieldwork was carried out between 1st October 2016 and 7th November 2016 and attracted a response rate of 34%.

All figures, unless otherwise stated, are from Clarient Research.  The sample size was 516 responses from a postal survey to 1,506 Blind Veterans UK beneficiaries aged 75 or older who joined the charity in the last three years.  Fieldwork was carried out between 1st October 2016 and 7th November 2016 and attracted a response rate of 34%.