You are here: Home / News / News / Ballymena man stepping off on The Wellington Trail for military charity

Ballymena man stepping off on The Wellington Trail for military charity

George Chesney of Ballymena in Co. Antrim has created a novel fundraiser for SSAFA, the Armed Forces charity: The Wellington Trail. 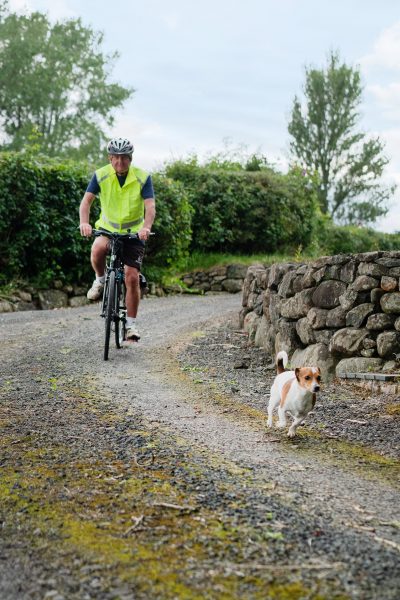 Taking place during September, The Wellington Trail is punishing 450-mile-trip from Madrid to Bayonne in Southern France following, roughly, the route taken by The Duke of Wellington’s allied armies in the latter part of the Peninsular Campaign during The Napoleonic War.

But while Wellington’s forces did it on foot and by hoof, George – who admits to being “…over 21” – will be on two wheels, cycling the entire route unsupported. And what a route it will be, taking in the Sierra de Guadarrama with an elevation of 2,130 feet, before a pass at 6,150ft – more than a mile – up.

After a few more ascents and descents, it is on to the Pyrenees, which George insouciantly describes as “fairly demanding”. His training regime is a mix of long-distance cycling, rowing, and hard, physical work on the few acres he owns.

George has an extensive military past and present. He was commissioned into the Corps of Royal Engineers in the Regulars where he served for five years before a further 24 in the Territorials. He is now Chair of the Reserve Forces and Cadets Association Northern Ireland.

On why he set himself this challenge, George said:

“Military charities are a very crowded place, and so I wanted a well-known, established charity which does more work than dealing with mental illness, giving the support veterans, serving personnel, and their families need, where they need it, and how they need it.

“Very importantly, I wanted to raise money for a charity that operates distinctly in Northern Ireland, the Republic of Ireland, and GB to reflect the wide-ranging units that recruited from the island of Ireland during the Napoleonic War, and SSAFA fits the bill.”

George’s epic bicycling expedition begins in Madrid on September 4, but not before a brace of send-offs. The first of these is at Galgorm Resort & Spa on August 31 with the Mayor of Mid and East Antrim Council attending, and the second is on September 3 at Belfast Rowing Club in the presence of Dame Fionnuala Joy-O’Boyle, HM Lord Lieutenant for the City and Borough of Belfast.

Anyone wishing to see George off in style should contact ni-comms@rfca.mod.uk.

SSAFA has been providing support to veterans, serving personnel, and their families since 1885. To help this work carry on for veterans in Northern Ireland, the Republic of Ireland, the UK, and the rest of the world, visit George’s fundraising page at justgiving.com/fundraising/wellington-trail.