You are here: Home / News / News / Beneficiary of The Not Forgotten awarded prestigious medal for 20 years voluntary service

The Not Forgotten
Veterans, Volunteering

Johnnie Ray was awarded the prestigious Order of Mercy by The League of Mercy Foundation on 10 September at Mansion House, City of London, for giving 20-years of voluntary service to The Not Forgotten, a British Armed Forces Charity for serving and ex-military personnel. 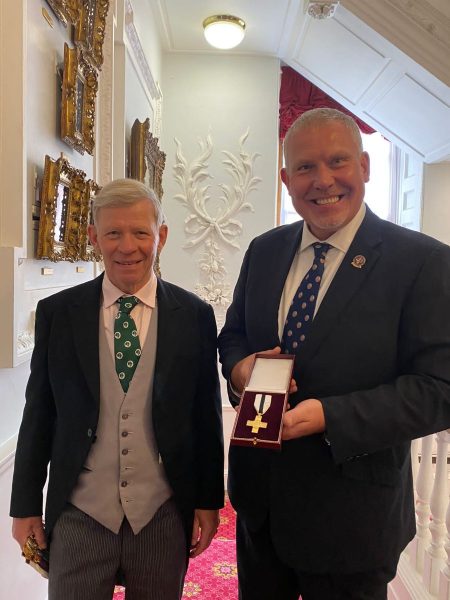 The League of Mercy is awarded to those who have given at least seven years distinguished and unpaid personal service to the League in support of charity hospitals, or in the relief of suffering, poverty or distress.

Johnnie served with the Grenadier Guards between 1985 and 1991. In 1989, during a training event, he lost both his legs when an undetected mine exploded. Determined not to be limited by his disabilities and with the support of his wife, Sarah, he set about rebuilding his life beyond the military.

Tragically, in 2000, he lost Sarah to cancer. Knocked, isolated, lonely, demoralised but certainly not out, Johnnie engaged with The Not Forgotten and his life has taken a new direction where his focus is supporting others.

The Not Forgotten was founded to provide entertainment and recreation, including social activities and challenge holidays, for wounded service personnel and injured veterans.

Originally a beneficiary of the charity, Johnnie now tirelessly volunteers to support veterans during The Not Forgotten’s adventure and respite holidays where lonely, isolated and vulnerable members of the Armed Forces community come together to regain their independence and dignity.

Johnnie wants to give back to the charity and help others achieve things they never thought possible since leaving service with physical and mental injuries.

James Stopford, CBE, CEO The Not Forgotten tells us:

“We are thrilled and proud that Johnnie has been honoured with this prestigious medal for all that he has done to support our beneficiaries, despite the adversity he has encountered. He is exceptionally generous with his time, looking after and supporting others who are lonely and at a low.

His story is one of triumph over adversity, which inspires others to do more beyond their disabilities.  His caring, sympathetic character and military sense of humour does so much to help those who have served their country and now need a boost. He has a natural ability to raise morale and restore the confidence of our veterans in needs.  He really does go the extra mile, day on day, as an exemplar volunteer who is making a difference for so many veterans in need.”

Lord Lingfield, President of the League of Mercy awarded Johnnie with his medal. He says:

“We believe that it is vital to recognise & honour the work of volunteers. By doing so we may develop public awareness of their work & encourage others to join them in giving up their time to the voluntary care of those in need.”