Bereaved military children’s charity, Scotty’s Little Soldiers, have announced the return of their annual cycling challenge, Tour de Scotty, which will take place over the course of July. 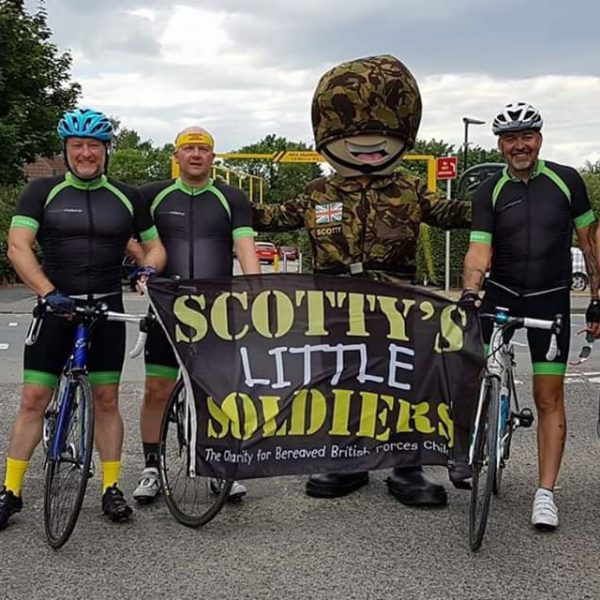 This year, the charity is challenging supporters to ride either 250 or 500 miles (or more) over the month, all the while raising vital funds for children and young people who have experienced the death of a parent who served in the British Armed Forces. Supporters can take to the road or cycle indoors on an exercise bike.

Once you’ve signed up for the challenge and received your first donation, you’ll receive a pair of exclusive Scotty’s Little Soldiers shoelaces, then a Tour de Scotty medal when you’ve reached the target of £150 and completed your challenge.

“Scotty’s does so much for the military community and this is my way of giving back. The services they provide are second to none and every penny helps make sure bereaved British Forces children get the support need.”

In 2020, Paula Wilce cycled in memory of her son, Private Ross Standing, who died in a car accident the previous year. Ross was just 27 when he died and left behind three young children who have all been supported by Scotty’s Little Soldiers.

Challengers are to complete a minimum of 250 miles, but some people want to push themselves even further. Veteran and former RAF Physical Training Instructor, Dominic O’Sullivan, has taken part in the challenge multiple times, and achieved a record distance of 913.5 miles over the course of one month.

“Tour de Scotty is a great way to keep up awareness and fundraise for the charity. I hope people who don’t usually cycle get on their bike and start peddling for Scotty’s. Who knows, it may be start of something even bigger for you. It was for me!”

Scotty’s Little Soldiers is a charity dedicated to supporting children and young people (0 to 25 years) who have experienced the death of a parent who served in the British Armed Forces.

Inspired by the experience of Army widow Nikki Scott, following the death of her husband Corporal Lee Scott in Afghanistan in 2009, the charity, which was set up in 2010, provides support and guidance to hundreds of bereaved military children and young people throughout their childhood.

“The Tour de Scotty is one of my favourite events and I can’t wait to see everyone getting involved again this year. We’d love to see as many people taking part and raising money for bereaved military children and young people as possible, which is why you can choose to cycle indoors or outdoors and complete either 250 or 500 miles. Or even more, if you really want to push yourself!

“Dealing with the death of a parent at such a young age is incredibly difficult for lots of our members, and every penny raised really does make a difference. It means we can continue to ensure our members have access to the support they need and always know that there are people who understand what they’re going through and want to help.”