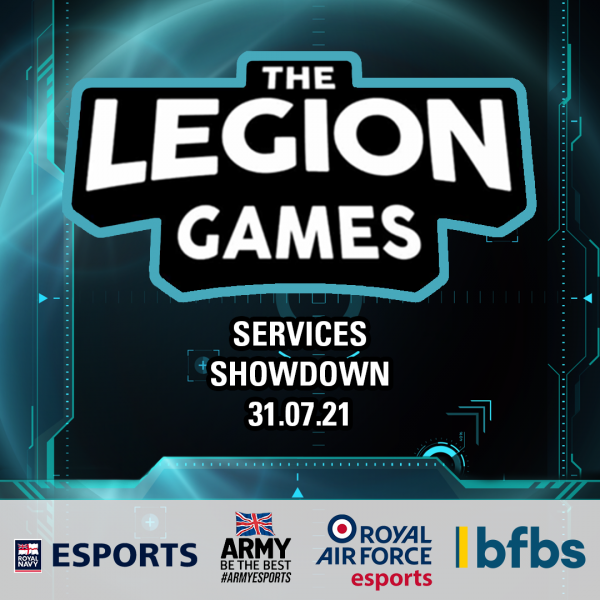 This Saturday (31st July), BFBS, the military media organisation and charity, will partner with the armed forces Esports Teams to host The Legion Games Services Showdown, as part of The Legion Games, to help raise money for the Royal British Legion in its centenary year.

The Legion Games Services Showdown is the ultimate tri-services online gaming event that will see senior representatives from the Royal Navy, WO1 Carl Steedman, British Army, WO1 Marc Elliott and Royal Airforce, WO1 Jake Alpert MBE come together as team leads, on their individual service Twitch platforms, to battle it out playing Black Ops: Call of Duty.

The event will be part of a twelve hour live stream (The Legion Games) where the armed forces Esports teams will challenge each other at different games, including Rocket League and League of Legends.

Each team lead will bring decades of experience on operations, leadership and combat skill. But how will that translate into the virtual gaming world? Soldiers, sailors, airmen and airwomen, officers, and any others who wish to, will be able to participate in the battle for the crown.

Throughout the pandemic, online gaming and esports has proved invaluable for mental health and combating isolation and loneliness, as it provides an easy platform for socialising and engagement between service personnel.

The Legion Games is an opportunity to not only virtually connect military personnel with the civilian population through gaming, but also facilitate and encourage valuable skills such as teamwork and strategy. Plus, there’s nothing like a bit of healthy competition to get people going.

“BFBS is proud to support a range of projects which connect the armed forces world.”

“After a very tough and challenging year, the Legion Games Services Showdown will be a great opportunity to do this as well as have a lot of fun.  They will also promote mental health and help raise money for a really worthwhile charity.”

“Esports has positively impacted our personnel; it continues to combat isolation and increase mental resilience through an interconnected network of gamers known as the RAF Video Games and Esports Association.”

“Within seconds, users are connected to over 1000 other gamers across over 40 games and compete at the highest UK level Esports events, connecting through a digital arena.”

The Legion Games Services Showdown, in partnership with BFBS, can be supported by participating or watching the event at 7pm on Saturday 31 July via https://www.twitch.tv/britisharmyesports and donating money to The Royal British Legion via the stream.

For another way to help the RBL in their 100th year, members of the armed forces can volunteer for a City Poppy Day, a collection day involving uniformed personnel across the country to help raise crucial funds for this year’s 100th Poppy Appeal. To volunteer, visit rbl.org.uk/uniformedcollector.