The Blades, who perform dazzling displays around the UK and represent GB internationally by campaigning for the Red Bull Air Race World Championship, has donated over £34,386.11p to long-term charity partner the RAF Benevolent Fund – a charity close to the team’s heart. 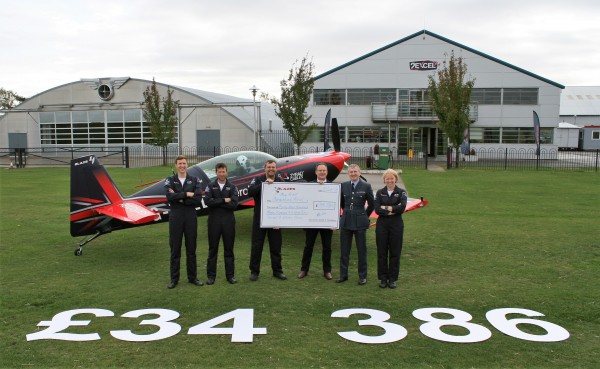 The Blades pilots, with strong heritage drawn from the Red Arrows, welcomed Paul Higgins, RAF Benevolent Fund’s Chief of Staff, to their hangar at Sywell Aerodrome to receive the donation on behalf of the charity.

The Northamptonshire-based team has closely supported the RAF Benevolent Fund since 2015 when the charity became an official partner. So far, the team has donated an impressive £110,000 to the London-based charity which supports RAF personnel, past and present, and their families.

The money raised at the team’s annual charity event, The Blades Ball, by its 400-strong VIP guests, will support the charity’s commitment to helping and providing much-needed support to over 55,000 RAF families.

Andy Evans, Blade 1 and Team Leader commented: ‘‘It’s been a privilege to support such a worthy and inspirational charity for the past four years and an honour to hand over a cheque for over £34,000. The RAF Benevolent Fund is an independent charity that relies solely on external support to continue the fundamental work it carries out, and we hope our donation will go a long way to help those in need. As former military pilots ourselves, the RAF Benevolent Fund is a charity which resonates with the team and we look forward to working alongside the charity in the future.’’

Paul Higgins, Chief of Staff at the RAF Benevolent Fund said: “On behalf of the Royal Air Force Benevolent Fund, may I say how delighted we are to receive this generous donation from the Blades. Now in its fourth year, it is a partnership we are very proud of and I’d like to thank everyone involved in organising the Ball and for all those who supported us throughout the 2018 season.

“As a charity, we rely on the generosity of our supporters and partners such as the Blades to help us to deliver our life-changing welfare work.  For almost 100 years, the RAF Benevolent Fund has been there, through thick and thin, supporting the RAF Family, last year spending £18.8m assisting more than 55,000 members of that family in their time of need.”

Founded in 1919, a year after the Royal Air Force, the RAF Benevolent Fund has a long and proud history of supporting serving personnel, past and present, and their families. In 2017 the charity spent over £17 million supporting more than 55,000 members of the RAF family with a wide range of services, from child-care centres and youth workers on each RAF station, to relationship counselling, and assistance with financial, housing, and medical needs. The RAF Benevolent Fund is there for any member of the RAF family who are in need of financial, practical or emotional support.

For almost a decade, The Blades have hosted an annual charity event, The Blades Ball, to raise vital funds for a selection of nominated national and local charities selected by the Blades Events Committee. The Blades Ball to date has raised over £2million for charitable causes.

About the Blades Aerobatic Team and Racing Team:

– The Blades is the only ‘aerobatic airline’ in the world, offering passengers the opportunity to fly close-formation aerobatics in the team’s Extra 300 aircraft

– Collectively, the Blades’ pilots have over 25,000 flying hours

– Aside from performing at air shows, The Blades manage and deliver high-end corporate and bespoke events of all sizes

– The Blades are based at Sywell Aerodrome in Northamptonshire