You are here: Home / News / News / Blind artist from Brighton refusing to let passion for painting draw to a close 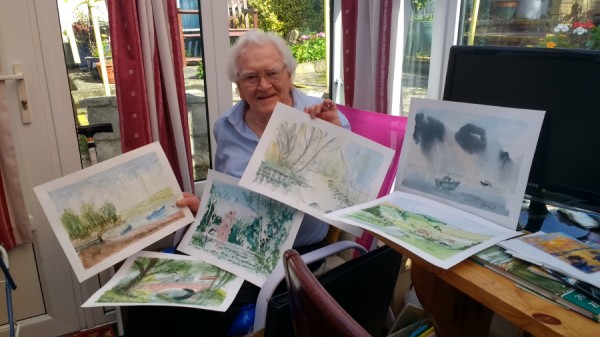 A blind artist from Brighton is to exhibit his artwork in an exhibition at Brighton Art Open House.

Sam Beeston, 89 and originally from Stoke-on-Trent, says that his passion for art began at the earliest of ages. He explains: “I can’t have been more than eight years old when it began. Our education system was vastly different to how it is today, so when I took my 11 plus exams I actually went to the Burslem School of Art.

“Of course, they taught all the usual subjects; maths, geography and everything else. But for me, it was always centred around art; so it wasn’t history so much as it was history of art!”

Unfortunately for Sam, after two years his dad called a stop to the art and encouraged him to pursue a more traditional career. He explains: “In those days, boys went out and earned a keep in the household. I had to find a full-time occupation, so my teacher secured me an interview at the City Works Department, in the building section. I went down and before I knew it, I’d signed myself away for a seven year apprenticeship!”

Sam’s training was cut short when he was conscripted into the army on January 10 1946, his 18th birthday. He later returned to the City Works Department, this time as a decorator. He worked as an inspector of housing, before a promotion led him to the position of Clerk of Works in the architects department. It was after he was transferred to Brighton as a maintenance surveyor that he retired early and, as he puts it, really began to take his art seriously.

He explains: “Even when I was still working I had a sketchbook which I took with me absolutely everywhere. I was then introduced to the St. Thomas More Art Group and soon became both coach and teacher of art! I did that for 20 years. 20 absolutely fantastic years.”

Sam’s main interest lies in landscape art. He explains: “I’m a huge fan of artists such as Turner and Constable. Every time I had the opportunity to visit an art gallery, I’d take it with both hands. That was my main concern wherever and whenever I travelled!

“I was never really keen on painting models, human bodies or portraits. I’d just love to go out and bask in a beautiful landscape; a big mansion house, a church, or something like that. That’s all I wanted and all I needed!”

His position sadly had to come to an end, at least in a full-time capacity, due to his worsening eyesight. Unfortunately, Sam suffers from age-related macular degeneration, an eye condition that attacks the central part of your retina, known as the macular.

As a National Service veteran of the Royal Engineers, Sam was eligible for the free lifelong support offered by Blind Veterans UK. It is through the support of the charity that Sam maintains he’s been able to continue his art. He says: “Blind Veterans UK has been marvellous for me. They’ve given me so much, that’s really what’s kept me going.

“They’ve loaned me a tripod, which I can put my camera on, and they’ve also given me a monitor, about the same size as a small television, which has been absolutely fantastic. I can enlarge my photos on it, section by section, which I can then do my paintings and sketches from.

Sam’s upcoming exhibition at the Brighton Art Open House will be just the latest in a long line of displays he’s gifted to the local community. He explains: “I’ve been exhibiting every year since 1978! My first was at Eastbourne Library, it ran for a few weeks. Since then I’ve been all over the place!”

Sam will be exhibiting his work with The St. Thomas More Art Group at the Brighton Art Open House on Saturday 14 October from 10:00am – 4:00pm. Admissions and refreshments will be available for donations.

Blind Veterans UK was founded in 1915 and the charity’s initial purpose was to help and support soldiers blinded in the First World War. But the organisation has gone on to support more than 35,000 blind veterans and their families, spanning WWII to recent conflicts including Iraq and Afghanistan. They have set the ambitious target to double the number of veterans receiving its life changing support by 2022.