You are here: Home / News / News / Blind civil servant from Cumbria to take on 100km challenge for sight loss charity 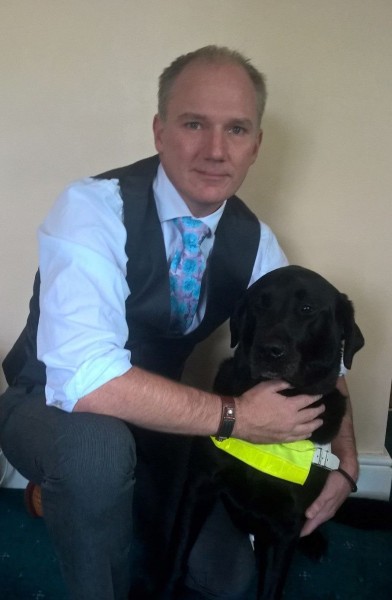 A blind civil servant from Barrow-in-Furness is training to complete a 100 kilometre walk for Blind Veterans UK, the national charity for vision-impaired ex-Service men and women.

Adrian Treharne MBE, 46 and born in Catterick Garrison, signed up to the event to satisfy a growing urge to test himself physically. He explains: “For a while now I’ve wanted to do some fundraising that’d allow me to push my body to the limit, and the 100k Yorkshire just seemed like the perfect opportunity.

“I’m also a Director and Trustee of a blind society in Cumbria, and the idea of participating in an event which supports ex-Service personnel is something that myself and the Chief Executive have been speaking about for a while now.”

Adrian, who was awarded an MBE for services to people with disabilities in the public and charitable sectors in this year’s New Year’s Honours list, has lived with sight loss since birth. He says: “I’m registered blind and have been living with retinitis pigmentosa all my life. Essentially that means I have tunnel vision during the day and am totally blind at night. I also had cataract surgeries when I was a teenager and have to take daily treatment for high pressure. All in all I’m left with just 10% vision.”

Adrian, whose grandfather served as a Regimental Sergeant Major, has worked in the public sector for much of his adult life. After working in Finance and Property Management at Catterick Garrison for HQ 19 Merchandise Brigade, Adrian became a Computer Programmer for the Royal Air Force at RAF Stanbridge in Leighton Buzzard. Later, he moved into Defence Procurement, where he worked for all branches of the armed forces. From here he took on various roles within Whitehall departments, including delivering some of the first online government services and taking a flagship bill on pensions through Parliament. He eventually moved to the Home Office, where he is currently an Assistant Director. He explains: “I’m currently working in sustainable development, which is another exciting leap into a different area. One of our biggest focuses is on the 17 UN sustainable development goals, which basically fall into three main areas: economic, environment and social. My job is to make sure the department reports on its delivery of these and meets its Greening Government Commitments.”

Currently, Adrian’s focus is on making sure he’s in peak physical condition come June 23. He says: “I’ve done 30-mile walks before, but nothing like this! I’m anxious, if a little worried to find out how strong my legs are. That being said, I’m currently in the midst of a 100-day one million-metre row challenge, so hopefully that won’t do any harm either!

“I’ve also got the Keswick to Barrow Walk, a 40 mile challenge, pencilled in for 12 May, so that should be a great opportunity to see where I’m at and also get my body used to such long, gruelling distances.”

As for the fundraising, Adrian is keen to encourage others to take the philanthropic lunge themselves. He says: “Getting out there, pushing yourself physically and interacting with some great people is an incredibly worthwhile use of anyone’s time. With a charity such as Blind Veterans UK, what’s also important is that most people will know someone who has or will have an eye problem at some point in their lives. The work the charity does, along with some many other sight loss charities, is absolutely vital and something that we all stand to benefit from – if not now, then in years to come.”

The 100k Yorkshire will take place from 23 – 24 June 2018. It will see participants start and finish at Darley Memorial Hall in Nidderdale, with a circular route which passes through Brimham Rocks, Ripley Castle and an abundance of stunning fields.

To support Adrian as he takes on the 100k for Blind Veterans UK, please visit: justgiving.com/adrian-treharne.