A blind Second World War veteran from Peebles in Scotland has written memoirs of his time during the conflict with the support of Blind Veterans UK, the national charity for vision-impaired ex-Service men and women. 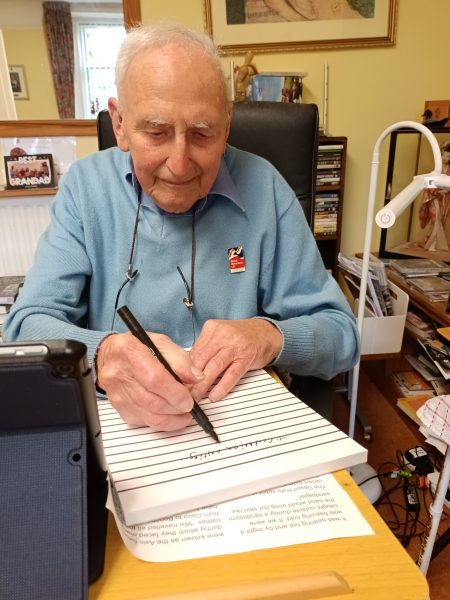 John McOwan, who is 101, began to write down his memories of the war during the nationwide Covid-19 lockdown.

“In 2019 I joined a group of veterans on an organised trip to Normandy to mark 75 years since the D-Day landings. During the trip, a lot of memories which had laid dormant for many years were rekindled.

“A few months later the outbreak of the Covid-19 pandemic and the introduction of the lockdown restrictions led me to wonder how I’d pass my time.

“Blind Veterans UK along with other veteran charities came to my rescue. They encouraged me to stay in touch with other veterans by phone or over the internet. I was also encouraged to write a book which was the seed that germinated my decision to write of my experiences during World War Two.

“This kept me busy and took me right through the lockdown period. I was quite happy at home writing and found the days weren’t long enough.”

John joined the Royal Artillery in 1939 at the age of 18 and was with them for nine months before the Second World War broke out. He was then transferred to the Royal Electrical and Mechanical Engineers.

During the war John was a Desert Rat and was stationed in the Middle East, Cairo, Italy and took part in the Normandy landings. In 1946 he was discharged from the British Army as a sergeant.

“I thought to myself so many veterans have passed away leaving their families desperate to know what they did in the war and now I had the opportunity to write my story.

“I hope my story will make others appreciate the horrors and grief war leaves behind.”

John lost his eyesight due to macular degeneration and he has a pseudophakia (false lens) in both eyes. John has no vision in his left eye and only some vision in his right eye.

“I can still see to get about but I can’t recognise faces. There is a mistiness that covers everything but I don’t let it get me down.

“If it wasn’t for the encouragement and support I received from Blind Veterans UK and my close family, I doubt I ever would have completed my memoirs.

“Everything the charity does to help veterans makes a huge difference to our quality of life.”

Blind Veterans UK provided John with equipment to help him write his memoirs including wide lined paper, a magnifier and lighting.

Frances Nixon, a volunteer with Blind Veterans UK, spent over 120 hours typing up John’s handwritten notes after she responded to an email looking for a volunteer to help John with his project.

“I was very lucky to have been chosen, it’s been wonderful. John’s story is so compelling, and he tells it in such a straightforward way.

“As I typed, I was living his story, I felt like I was there. I sat at my computer and I laughed and I cried.

“It’s been a great privilege and honour to have been involved.”

John wrote his story for his family and now plans to get it made into a book dedicated to his four great grandchildren. In the future John hopes he may get his book published.

If you would like to volunteer for Blind Veterans UK like Frances, you can find out more at: blindveterans.org.uk/volunteer