You are here: Home / News / News / Blind Veteran and his family say thank you for his amazing over 100 100th birthday cards following a public appeal

A blind D-Day veteran would like to thank the public for sending him a total of 128 birthday cards after the military charity Blind Veterans UK backed an appeal for him to be sent cards for his 100th birthday. 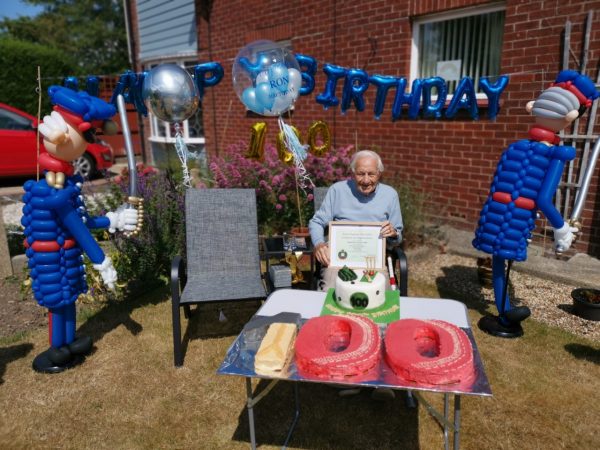 Ron Cross, celebrated his birthday in isolation, two days after the 76th anniversary of the D-Day landings. The appeal was launched by Ron Cross MBE’s granddaughter, Amy Cross. She says:

“Thank you to everyone who sent my wonderful grandad a birthday card.  We couldn’t have the 100th birthday party that we’d imagined but he was thrilled with all the cards he received. It made his day very special. Also a special thank you to Bind Veterans UK for helping with the appeal and for everything that they do for him”.

Ron served in the 79th Armoured Division, a specialist unit created specifically to form the first line of attack as part of the Allied invasion force. As part of the Armoured Vehicles Royal Engineers, Ron and his fellow engineers were responsible for landing tanks and clearing minefields set by the Germans before reinforcements arrived.

He was discharged as a Corporal in 1946, after which he returned to Gosport to work at Haslar Hospital as an Occupational Therapist for 37 years. He developed and built up the Occupational Therapy Department over a long career and received an MBE for his work at the hospital.

Ron’s vision started to deteriorate in 2009 and he was later diagnosed with age-related macular degeneration (ARMD). He began receiving support from Blind Veterans UK in 2012.

“Once my sight started to get worse I thought that I should stop driving and went to my optometrist who said that I would have to stop. My sight has got worse steadily since then.

“Blind Veterans UK are marvellous. Three years ago I couldn’t write a letter anymore because my sight had got so bad. But I went on a Blind Veterans UK IT course and they have given me all the training and equipment I need to carry on. I have a special screen that magnifies what I write and software that reads it back to me.

“I can now send emails which is so important for keeping in touch with people like my grandchildren.”

“Blind Veterans UK gave my grandad a computer which speaks to him so he can use it despite not being able to see much. I love telling people that my 100 year old grandad sends me emails, I’m so proud of him!”