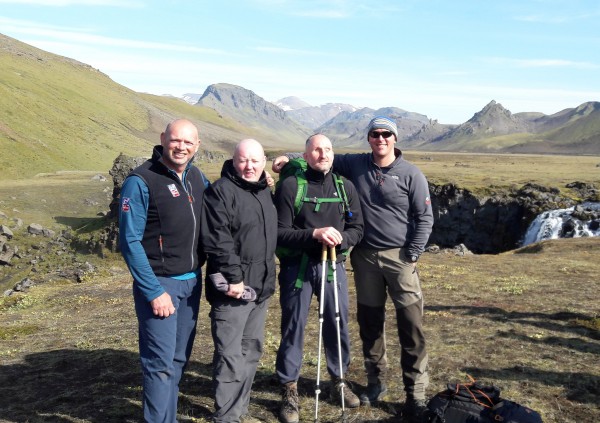 A blind veteran from Conwy has completed a three day Iceland trek with Blind Veterans UK, the national charity for blind and vision-impaired ex-Service men and women and The Not Forgotten Association.

Amazingly, Steve Thomas, 45 and from Llanrwst, was entered into the challenge, which was arranged by The Not Forgotten Association, unknowingly. Steve explains “The Rehabilitation and Training Manager from the charity’s Llandudno centre put my name in the hat without me even knowing!

“Out of the blue, he told me that I’d been picked as one of the lucky few. I thought, ‘right then, time to get training!’”

On the challenge itself, which began on August 31, Steve says: “It was a tough first day, but after that, the second and third days were great. It was a more relaxed pace.

“Overall it was a great experience. Just being in Iceland itself, doing something like this that most disabled people, let alone vision-impaired individuals, rarely get the chance to experience, was fantastic. It was also great to get involved with the Not Forgotten Association. They arranged the event and so it was great to engage with another charity that supports veterans.”

Steve took on the 14-mile per day trek, funded by Help for Heroes, with fellow blind veteran, Mark Threadgold. The route saw the veterans begin in Landmannalaugar, crossing through Álftavatn and Emstrur before eventually finishing in Reykjavik.

While Steve has competed in a number of challenges since joining the charity in 2012, this was the first time he faced a task of this variety. He says: “I took part in the 100k Yorkshire challenge this year, a 100km walk through the night across the Yorkshire Dales. This trek was an entirely different challenge though, we were camping overnight and there was a slightly slower pace, just stretched over a longer period of time.

After leaving school at the age of 16, Steve went straight into the Army, joining the Royal Signals on 26 May 1988. His Service saw him tour the UK, including Northern Ireland as well as Germany as a driver linesman, before eventually discharging as a Signalman on 16 Nov 1992. Upon his return to civilian life, Steve worked in various security and delivery jobs, before later retraining as a roofer.

Unfortunately for Steve, he began experiencing issues with his sight in 1993 due to macular edema, which affected his central vision. Then, in 2001, he was diagnosed with retinis pigmentosa, which, amongst other things, renders Steve completely blind at night. Despite this, he was determined not to let his sight loss affect his life. Steve explains: “I actually carried on working until September 2009. I didn’t like to let it get to me. It was a slow process, which meant I had the chance to get on with my life and figure out how to adjust to the change. That’s not to say it wasn’t a shock for me though, or my family.”

Steve first came across Blind Veterans UK, which provides free lifelong support to veterans who have lost their sight, in 2010, before later joining in 2012. He explains: “At first I didn’t think I was eligible. My sight loss is not related to my Service. I later found out that the charity supports both war blinded and non-war blinded veterans, and that’s when I joined.

“The whole experience has been great. When I had to leave my job, my confidence was very low. I wouldn’t use local transport or anything like that, I’d have to depend on my wife quite heavily just to get around.

“Blind Veterans UK is a fantastic organisation in that sense. They’ve given me the confidence to do more for myself, rather than being dependant. They’ve helped me get on with my life and deal with my disability. It’s been great for both mine and my family’s life. Not only that, but the comradeship is brilliant. It’s just like being back in the army so it’s familiar. It’s encouraging.”

The Not Forgotten Association is a unique national tri-service charity which provides entertainment and recreation for the benefit of the serving wounded, injured or sick and for ex-service men and women with disabilities.

Help for Heroes supports those with injuries and illnesses sustained while serving in the British Armed Forces. No matter when someone served, we give them the support they need to lead active, independent and fulfilling lives. Our specialist team focuses on the five key areas of an individual’s life: medical, mind, body, spirit and family. We provide support to the whole family to help them all cope with the challenges they face. Long-term recovery is more than repairing damaged bodies and minds; it’s about rebuilding lives.