You are here: Home / News / News / Blind veteran fundraising £5,000 to show 1,000 isolated and vulnerable blind veterans that they are not alone this Remembrance Sunday

Blind veteran fundraising £5,000 to show 1,000 isolated and vulnerable blind veterans that they are not alone this Remembrance Sunday

A 40-year-old blind veteran will be running 75km in the days leading up to Remembrance Sunday. He hopes to raise £5,000 to send an iconic pin badge and message to 1,000 of the UK’s most vulnerable and elderly blind veterans, showing them that they are not alone despite spending Remembrance Sunday in isolation. 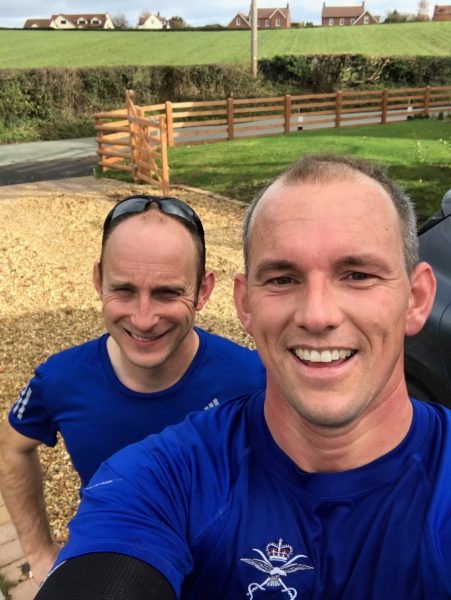 Starting today (2/11)  and running over the course of five days, blind Navy veteran Alan Lock will complete the 75km around the roads of Shropshire, guided by one member of serving personnel from RAF Shawbury at all times.

“It’s going to be a very different Remembrance Sunday this year. And with 90% of blind veterans being over the age of 70 and at an increased risk from Covid, the vast majority will be spending the period at home, alone.

“I wanted to do something to connect with them and make them feel slightly less lonely this Remembrance Sunday when normally they would be surrounded by family, friends and neighbours.

“After everything they’ve given for us I think it’s so important to show them that they’re not forgotten during this time when we can’t all get together at the usual parades and services.

“So I’m asking anyone who can to donate £5, which will pay for an iconic ‘Victory Over Blindness’ pin badge and message to be sent out to a vulnerable and isolated blind veteran this Remembrance Sunday. A donation of £10 would pay for two and so on. Any support is much appreciated.”

Alan joined the Royal Navy in 2002 and spent the bulk of his time undergoing submarine training. It was three years later that a rare genetic condition similar to macular degeneration would steal his sight and force him to withdraw from the Armed Forces.

“I’ve seen first-hand the transformational impact the charity has on blind veterans’ lives, including my own. They’ve supported me into employment and given me training in assistive technology so I’m still able to utilise all the fantastic technology available despite having a visual impairment. They even got me skiing, which I never thought I would be able to do again.

“I can’t describe how grateful I am that this one-of-a-kind organisation was there with me on every step of my journey adapting to life with sight loss. Losing my sight at such an early age was a huge challenge and I don’t know where I’d be without their support.

“During Remembrance I will be taking a proper pause from our fast moving world to remember and recognise the sacrifices of those who fell in service to our country. I will be going to a local church service and trying to explain the significance of the day to my five-year-old daughter.”

Sergeant Tom Healing, a Physical Training Instructor based at RAF Shawbury and one of those who will be guiding Alan, said:

“I am honoured to be able to support this fantastic event to show our blind veterans that they are never alone especially important at this time of year in the run-up to Remembrance Sunday. I am extremely proud to be a member of the RAF as being in the Armed Forces is like being part of a large family; our cadets and veterans are an important part of the military family and during the current climate we need to show our support much more.”