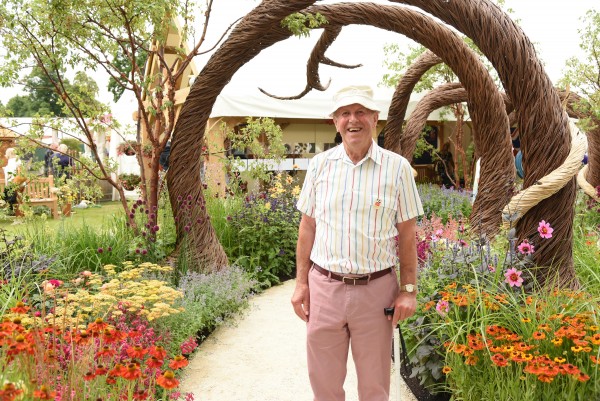 A blind veteran from Carlisle who has received vital support from Blind Veterans UK, the national charity for vision-impaired ex-Service men and women, has visited the charity’s gold medal-winning show garden at the prestigious RHS Hampton Court Palace Flower Show.

John Hortop, 78, and his wife Tanya, from Carlisle, visited the garden as part of a special week of gardening activities for blind veterans with green fingers held at the Blind Veterans UK training and rehabilitation centre in Brighton.

John recalls: “I did my National Service and could not wait to leave but when I did leave I realised I missed it so much I re-enlisted eventually joining the Royal Logistics Corps, serving in Belgium and Germany, then Australia and finally Kathmandu which I loved.  When I left the army I worked for a trekking company based in Carlisle but spending three months a year in Kathmandu”.

He explains: “Losing my sight put an end to my trekking and also to bird watching, another passion.  I can only identify birds by their song now, not where they are”.

“I found out about my impending sight loss during a routine check-up for my contact lenses.  I was just 40 so very young to suffer from glaucoma.  My sight deteriorated slowly at first but then speeded up and I noticed I was having trouble when driving.  It was life-changing when I was told.  I always enjoyed driving; it was a huge blow and continues to be so.  As a family we were great travellers, always flying somewhere, getting a car and just going”.

The staff at the charity were absolutely magic.  I have been given lighting aids and an iPad which I love. I was never keen on using a computer when I could see but I was told it would be easier to learn while I still had some sight.  I have gone from hating IT to finding it indispensable”.

John says: “I always loved gardening.  It was another passion but I am finding it more difficult these days.  We grow a lot of our own food and I can still plant the larger things like potatoes and beans and I leave the smaller seeds to my wife.  We have enjoyed attending the charity’s gardening weeks before and had an especially great time visiting Hampton Court”.

John’s wife, Tanya, adds: “Belonging to the charity is like belonging to a family.  I was so impressed with the professionalism, the friendliness and willingness to help, and loved meeting people at the centres. The benefit is jointly to me and the other members’ partners, as they are able to empathize with the problems we face. Even at 78, John often finds himself the youngest veteran there”.

The Blind Veterans UK ‘It’s all about community’ garden has been designed by celebrated designers Andrew Fisher Tomlin & Dan Bowyer and it will be one of the largest show gardens at Hampton Court this year. It was one of three gardens to receive a prestigious gold medal.

John says: “I have met so many veterans through the charity with inspiring stories to tell.  I would strongly recommend any former Service personnel suffering from sight loss to get in touch.  When I was tested by the charity initially my sight loss was not bad enough but later on re-testing I got the bad and good news – bad that my sight loss was much worse and good that I now qualified to become a part of the charity”.