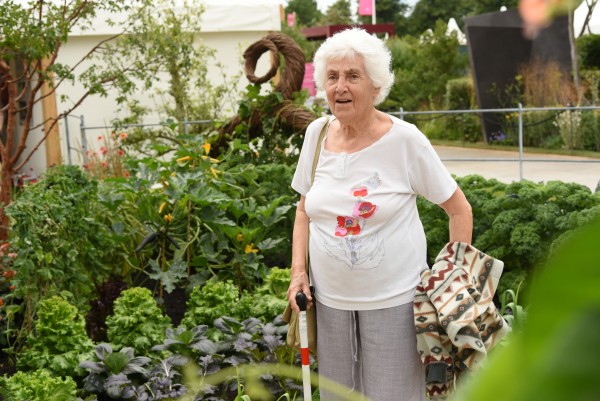 A blind veteran from Hayling Island who has received vital support from Blind Veterans UK, the national charity for vision-impaired ex-Service men and women, has visited the charity’s gold medal-winning show garden at the prestigious RHS Hampton Court Palace Flower Show this July.

Daphne Somerfield, 93, and from Hayling Island, visited the garden as part of a special week of gardening activities for blind veterans with green fingers held at the Blind Veterans UK training and rehabilitation centre in Brighton.

Daphne says: “I joined the WRNS in 1943.  I loved it!  To a young woman then it was all very exciting.  Girls in those days were far more restricted in what they could do and the Wrens gave me my freedom.  After leaving the Wrens I became a teacher”.

“It came as a huge shock to me, going blind.  I knew my sight was bad but it was still a shock when I was told I was legally blind”.

“I was told about Blind Veterans UK by the Hayling Island Blind Club.  It is a wonderful charity and they have been incredibly helpful to me.  Meeting people of your own generation and in similar circumstances is lovely.  I met two other ex-Wrens and we really hit it off.  The charity arranged for the three of us to stay together at their Llandudno centre for a holiday at the same time.  I don’t think I have laughed as much in years!

“I think the best thing about the charity is their attitude that nothing is impossible, even if you are blind.  It gives you huge confidence”.

“The charity has provided me with a CCTV magnified meaning I can read and I have been on a few IT courses run by them to improve my computing skills”.

The Blind Veterans UK ‘It’s all about community’ garden has been designed by celebrated designers Andrew Fisher Tomlin & Dan Bowyer and it will be one of the largest show gardens at Hampton Court this year. The garden was one of three to receive a prestigious gold medal.

Daphne says: “I had a fantastic time visiting the Hampton Court flower show.  I was a very keen gardener but since having knee replacements I can’t do anywhere near as much in the garden as I used to.  I do still grow my own fruit and vegetables though.  My garden is still my greatest joy”.

“It is marvellous that the Blind Veterans show garden is being used to reach out to more veterans that could get their support.  I really would recommend getting in touch with the charity if you even think you might be eligible.  Not just for the generosity but for the spirit of the organisation”.