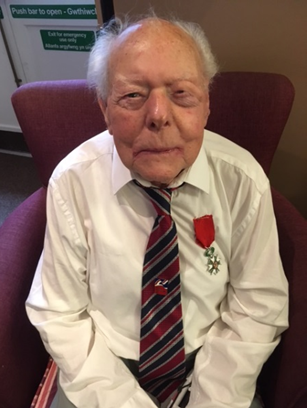 A blind veteran from Wigan who has received vital support from Blind Veterans UK, the national charity for vision-impaired ex-Service men and women, will be contributing to the charity’s show garden at the prestigious RHS Hampton Court Palace Flower Show this July.

Dennis Clements, 92 and from Orrell, has made a miniature garden for the flower show, titled The Relaxation Garden, which won the award for the ‘Best in Show Miniature Garden at the charity’s recent gardening week held at their training and rehabilitation centre in Llandudno.

Dennis, born in 1925, joined the Royal Army Service Corps in 1943, before discharging in 1948 as a Sergeant. His five years’ Service involved various tours of Europe, where he was primarily responsible for the management of ambulances.

Dennis recalls: “There was one particular story I always love to tell. It involved me accidently crashing an ambulance into a lamppost in Amsterdam, which unfortunately resulted in the lights going out in The Hague!”

Dennis was also involved in the D-Day landings, transporting diesel to the soldiers on the beach from D-Day 2+. Despite the many hardships and sufferings of the war, Dennis looks back upon his time of Service positively. He says: “Overall I look back on it as a good time in my life. I felt that I was doing something worthwhile; I loved the camaraderie and meeting new people. I also met my wife in Berlin!

“I wouldn’t have changed any of it for the world.”

After the war, Dennis worked as a foreman for Heinz, where he remained until his retirement at the age of 57. Unfortunately his eye sight began to deteriorate some 15 years ago. He explains: “I’ve got age related macular degeneration. It was a gradual process but it means that I’m now more or less blind in my right eye. I’ve also had merkel cell skin cancer which has affected my left eyelid. I’ve had to have it reconstructed with skin from my cheek. My family jokes that I now grow whiskers from my eyelid!”

Despite his severe sight loss, Dennis has been able to maintain an uplifting outlook on life. His daughter, Sylvia, explains: “He never stops smiling, never complains; he’s just so grateful for everything everyone does for him. He’s got a wonderful relationship with his doctors, they’ve left no stone unturned with their treatment of him and it’s because of his manner with them.”

Fortunately for Dennis, his doctors at St. Pauls Hospital in Liverpool told him he was eligible for the free lifelong support offered by Blind Veterans UK. He explains: “I just remember it sounding like a great idea. It’s opened so many doors, we’re just thrilled with the whole organisation.

“The staff at Blind Veterans UK are wonderful, I can’t believe how genuine and caring they are. The care they’ve given us, the help, the contacts, everything. It’s that feeling that you’re not alone, that you’re part of something much bigger – something you know you can always turn to for help.”

For Dennis, gardening has always been a part of his life. From the moment he moved into his first home, the focus was always on making the most out of his extensive outdoor space.

He says: “After the war my wife and I moved into a new council house, it was a lovely property with a big garden. That’s when I started gardening. Half the land was dedicated to vegetables and flowers, and the other half was for Sylvia to play in!

“We had a greenhouse and, if I’m honest, I think there’s where my real passion lay. My wife and I got absolutely hooked on it. We spent an awful lot of time in gardening centres, learning about propagating and taking cuts, delving into any gardening magazine we could find.”

Sylvia herself recalls just how central gardening was, and indeed remains, in her father’s life. She says: “He’s always got green fingers. Even now we go to garden centres regularly. He looks after my plants for me, his tomatoes are to die for!

“His sight loss had a real impact on his confidence, but when it comes to gardening he’s completely unchanged. He’ll be out there at seven in the morning, pottering, doing whatever he can until it’s dark.”