A blind veteran from Hampshire who has received vital support from Blind Veterans UK, the national charity for vision-impaired ex-Service men and women, has met The Countess of Wessex, who this year became the charity’s Patron.

Lewis Trinder, 92 and from Aldershot, met Her Royal Highness at the charity’s show garden at the prestigious RHS Hampton Court Palace Flower Show. The garden, titled ‘It’s all about community’, was one of three show gardens to receive a prestigious gold medal.

After working in Lloyds of London, dealing with US brokerage work for JH Minet & Co, Lewis volunteered for the Royal Navy on his 18th birthday in September 13 1942.

He explains: “I qualified as a Seaman on HMS Collingwood and then served on HMS Fleetwood, which was deployed on convoys to Sierra Leone.

“I also served on HMS Magpie during the D-Day landings, as well as Artic and Atlantic convoys, before joining HMS Opossum, a sloop in the Far East in 1945. It was in Hong Kong that I was promoted to Petty Officer, before eventually discharging in September of 1946.”

After returning home, Lewis moved into the pub industry, where he would take tenancy of a pub called the Castle Inn in the late 1940s, before selling and taking tenancy of The Princess of Wales in Aldershot for some 21 years.

Unfortunately for Lewis, he suffers from age related macular degeneration, which has left him with severely limited sight. He explains: “If I look at someone’s face, I can’t see it, but if I turn my head sideways, I’ve got peripheral vision. One strange thing, I find, is that I can see movement. If a fly were to go past I would be able to see that something was moving, but not what it actually was!”

Fortunately for Lewis, he came across Blind Veterans UK in 2012. On the support he’s received from the charity, he says: “They have helped me so much. I have a quality of life that I’d have never achieved without their aid.

“I have a talking watch and a talking computer that helps me with emails and documents. I have a magnifier which helps me read my newspapers and letters. The support overall has been absolutely fantastic. I could never praise one organisation more.” 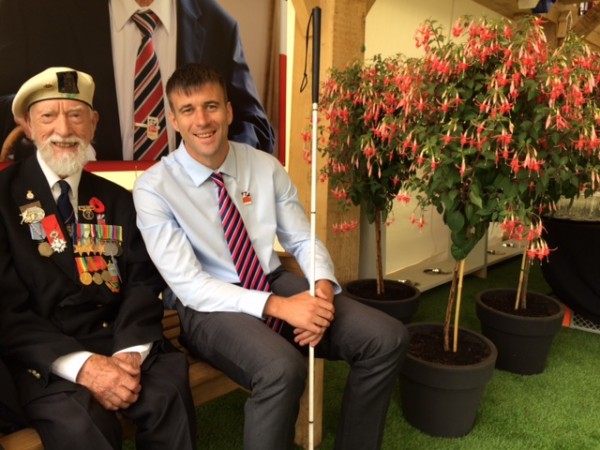 Lewis, an avid gardener, was excited to visit the charity’s show garden. He says: “Despite my sight loss, I’m still able to do things by feel and perseverance. I find the quality of life in my garden is good for me as I’m able to do things that provide me with a sense of enjoyment that I wouldn’t otherwise have.

“I so enjoy what I do up there. I can spend up to six hours a day up there sometimes. It’s taken many, many years to get, what I believe, is a fantastic display of blue bells, pink bells and white bells!

They truly are magnificent. This year I’ve probably got as good a display as I’ve ever had.”

Lewis and The Countess of Wessex were attending the Blind Veterans UK ‘It’s all about community’ garden at the RHS Hampton Court Palace Flower Show with other blind veterans supported by the charity when the show opened on July 3.

The garden has been designed by celebrated designers Andrew Fisher Tomlin & Dan Bowyer and is one of the largest show gardens at Hampton Court this year.

Lewis adds: “If anybody like myself is getting older, my recommendation to them is to find something to do, something positive. Get out and do something – be positive in life!”