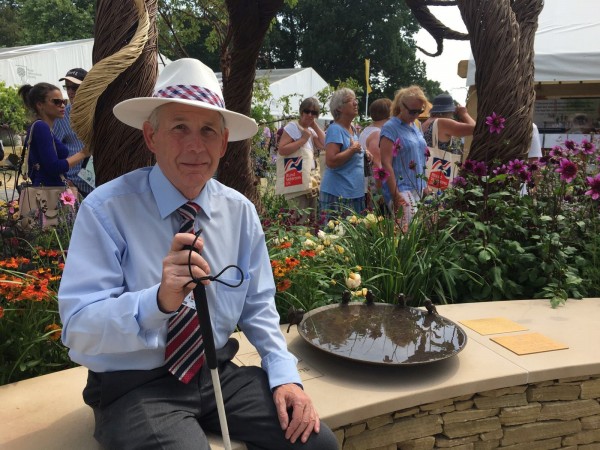 Chris Humphrey, 65 and from Thorpe End, volunteered as an ambassador for Blind Veterans UK and encouraged anyone who could receive support from the charity to get in touch.

Overall, Chris’ 11 years’ Service saw him travel as far as the Middle East, the Far East and the West Indies. He explains: “I went everywhere in the world, really, apart from Australia. We were actually meant to go there but our ship ended up catching fire! In the end we had to turn back to Singapore.”

Unfortunately for Chris, he suffers from Pseudoxanthoma elasticum, a genetic disorder that affects not only your sight, but the arteries in the rest of your body. He explains: “In a way, I’m lucky that my condition is confined to my sight, as it could’ve been a lot more serious.

On how he came to hear about Blind Veterans UK, Chris explains: “I always saw collection pots for the charity in the Navy, Army and Air Force Institutes, but I always assumed that only war-blinded veterans were eligible for their support. Luckily, my Social Services explained that I was entitled to it too.

“Right from day one the charity has made a huge impact on my life. I was taught how to use a computer with speech software. This was really important for as it allowed me to continue working.”

For Chris, gardening entered his life in earnest as a result of him losing his sight. Despite the challenges posed by his vision-impairment, he’s still able to navigate his way round the garden using, amongst other things, equipment and his other senses. He explains: “I use a special rope with knots to measure and feel things like planting distances. It’s amazing, really, just how much can be done with feel. I’ve also got a special adaptive watering can which doesn’t release the water until you press a certain button.”

“Even if I didn’t know my garden, I could still find my way by smell. Mock orange is really rather pungent right now!”

Chris volunteered at the Blind Veterans UK ‘It’s all about community’ garden at the RHS Hampton Court Palace Flower Show with other blind veterans supported by the charity.

The garden was designed by celebrated designers Andrew Fisher Tomlin & Dan Bowyer and was one of the largest show gardens at Hampton Court this year. Not only was it one of only three gardens to receive a prestigious gold medal, but it also won the Best Construction Award.

Chief Executive of Blind Veterans UK, Major General (Rtd) Nick Caplin CB, said: “The garden, at the prestigious RHS Hampton Court Palace Flower Show, was a fantastic opportunity to reach out to the thousands of blind veterans out there who don’t know they’re entitled to our support.

Chris adds: “I really can’t recommend the charity enough and would heartily encourage anyone to get in touch. Even if they think they can cope fine now, it’s about making sure you’re prepared for the future. It’s so much easier to adjust to severe sight loss if you start early.

“Whenever I’ve needed something, or wanted to know anything, there’s always someone I can ring for help. Blind Veterans UK has showed me that other people with far less sight than me can lead normal and happy lives. That really gave me confidence and I’m sure it can do the same for others.”