You are here: Home / News / News / Blind veteran from Rhyl receives prestigious medal for helping liberate France from the Nazis 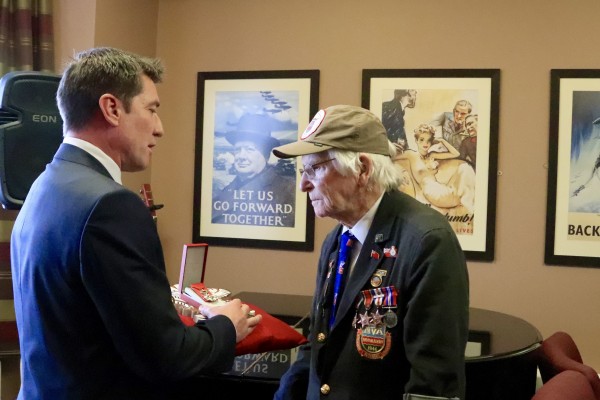 A Second World War blind veteran from Rhyl has been presented with the Chevalier de l’Ordre National de la Legion d’Honneur for his part in the liberation of France.

Brian McManus, 90, was presented with the prestigious honour at the Blind Veterans UK training and rehabilitation centre in Llandudno on Wednesday 1 March. The ceremony was attended by several members of Brian’s family including his daughter Linda and officiated by Steve Boswell, the charity’s Llandudno Centre Manager.

Brian says: “For all of us in Branch 94 of the Normandy Veterans Association, it’s a great, great privilege. We appreciate enormously what a great honour this is that the French President has bestowed upon us.”

After leaving school at the age of 14, Brian headed straight into training to join the Merchant Navy. In April 1944, Brian joined the Samholt and sailed from Manchester to King George V dock. After anchoring off at Southend, Brian became part of a ten ship convoy that sailed towards Normandy. On 3 July 1944 at 7:00am, the Samholt anchored off Juno Beach, and in doing so, became the last ship on the Eastern side of the invasion anchorage.

Brian recalls the constant danger that his and so many other anchored ships were in during the campaign, due in large part to the scale of the damage being inflicted by the Germans. He says: “For the ships anchored off the assault beaches, it was a position of extreme vulnerability, particularly at night-time when E-boats and Marder attacks were common.” 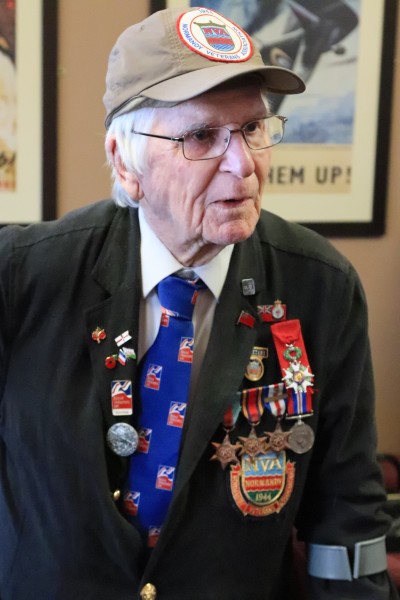 He continues: “The Marder in particular was one-man electrically propelled German submarine carrying one torpedo. It had a range of 48 miles and a loaded speed of three knots. I remember on the 8 July, they sunk the minesweeper Pylades eight miles north of Oustreham, as well as torpedoing the Polish cruiser Dragon off Sword Beach. It was at Sword Beach where the majority of these attacks occurred, despite the fact that Juno Beach, which was not only well within their range, but also where we were anchored, would’ve been a far better target for them.”

In mid-September, Samholt was withdrawn from Normandy, with Brian and his crew travelling to New York via Southend, and later Hartlepool. From here, he sailed to Port Said, Egypt for 4 December, before spending Christmas Day in Madras, India, which Brian admits resulted in an altogether more unconventional kind of festive experience. He says: “Of course there was no wine on board, so the 2nd engineer complained and it was agreed that each officer could have six cans of beer instead. We ended up drinking in the bar in the Connemara Club, which as you can imagine was heaving with young British Army officers!”

It was not until 2014, on the 70th anniversary of the Invasion of Normandy, that Brian learned he may be eligible for the Legion d’Honneur, France’s highest order. Despite the sheer amount time that has elapsed since the war, Brian is able to look back with clarity on those everyday occurrences that characterised his time in service. He recalls: “There were special articles of agreement for merchant navy. The crew weren’t paid overtime, they just received 30 shillings per week, 100 cigarettes and a pound of sweets and chocolate. Well I didn’t smoke so I swapped mine for the sweets and chocolate. I probably ended up with about two pounds of chocolate per week, and considering it was rationed, I’d say I did pretty well!”

Brian, who suffers from age related macular degeneration and glaucoma, counts the backing he’s received from Blind Veterans UK as crucial to his being able to regain independence following sight loss. He says: “The staff at the Llandudno Centre have been exceptional. They gave me a huge magnifier which helps me read my post. They’ve also installed some reading programmes on my computer which help me read the screen, along with a keyboard with large letters.”