A blind veteran from South Yorkshire has recently taken part in a “Virtual Introduction Week” organised by Blind Veterans UK as he was unable to attend their Llandudno centre earlier this year and be introduced to the charity in person. 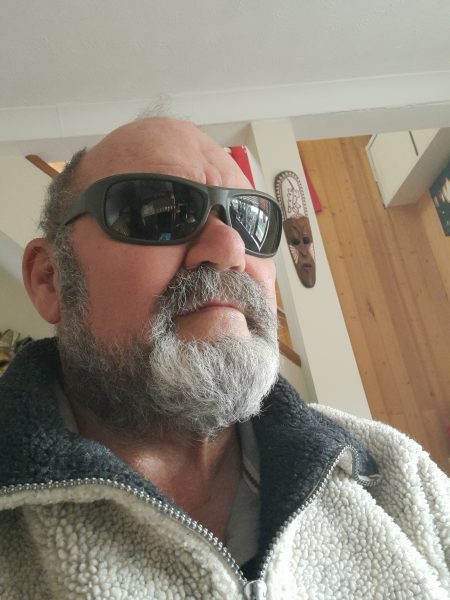 Phillip Sanderson, known as Sandy, 65 and from Doncaster, along with three other working age blind veterans joined a virtual call every morning which was organised and delivered by Blind Veterans UK staff. Sandy says:

“I was supposed to go to the Llandudno centre for the introduction week in March this year. We were told this couldn’t go ahead because the centre had closed because of COVID-19. I was disappointed that I couldn’t go but I completely understood why. When I was first told about the virtual introduction week, I did wonder how that would work but it was absolutely brilliant”.

Before the COVID-19 pandemic, all veterans who had recently joined the charity would attend one of their training and rehabilitation centres in Brighton or Llandudno for a weeklong introduction. During their stay, they would learn about how the charity could support them and meet other blind veterans. Due to the closure of both the centres to visitors, the charity has designed a course that could be delivered remotely. Mark Hollis, Llandudno Rehabilitation Support Team Leader, says:

“It has been really important that we continue to support new members like Sandy, especially during this time of uncertainty and disruption. We want to be able to deliver something that is that is meaningful, social and informative”.

Sandy joined the Corps of Royal Engineers at the age of 16 and served for 24 years. He left the Army in 1995 as a Sergeant. He started to lose his sight two years ago when he was diagnosed with mucous membrane pemphigoid. He says:

“I was told at the time that in two years I would have totally lost my sight. Luckily, I have been given medication that has slowed that down”.

Fortunately, Sandy found out about Blind Veterans UK when he went to see an eye specialist in Nottingham. He says: “When I mentioned that I had been in the forces, they said that I should try and get in touch with the charity because I might be eligible for their support. I did just that and I became a member last year”.

Each session during the virtual introduction week, focused on a different topic such as “health and wellbeing” and “support networks”. These addressed the issues the veterans faced and helped provide support and advice from both the staff and the other veterans. Sandy says: “It was great to virtually meet all the other veterans on the call. We all arrived there differently but we are all on the same boat. I also enjoyed talking to the staff who led the sessions. I had been receiving emails and letters from them, so it was great to get to know them a bit better”.

Blind Veterans UK started the virtual introduction week sessions in September and have been providing them for new members up and down the country on a weekly basis. Sandy says:

“During the introduction week, I learnt about an exercise class that the charity does virtually every Wednesday so I’m going to start that. Before I lost my sight, I was a keen photographer. When I started to lose it, I put my camera away. Blind Veterans UK have encouraged me to get it back out and I’m looking forward to one day going to one of their photography weeks at their Llandudno centre to learn some tips and tricks!”

“There is so much that we can and must do to support blind veterans to help them maintain physical and emotional wellbeing, and to feel safe, reassured and cared for during this crisis.

”You can keep updated on Blind Veterans UK’s response to Covid-19 at blindveterans.org.uk/coronavirus where you can also find out more about supporting the charity to make this new service possible.”